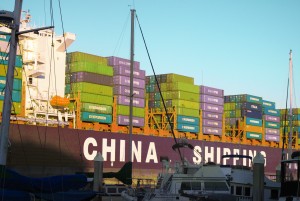 Chinas exports declined in September, the General Administration of Customs said in Beijing today, defying analysts projections for a steady increase and putting a disappointing end to recent series of positive data from the worlds second biggest economy. Exports rose above projections, narrowing the countrys trade surplus to little over $15 billion.

The General Administration of Customs reported that the Asian countrys outbound shipments fell by 0.3% in September, sharply confounding analysts expectations for a 6.0% increase. This was the worst performance in three months. Imports rose by 7.4%, exceeding forecasts for a 7.0% increase, which narrowed down Chinas trade balance surplus to $15.2 billion from $28.61 billion in August. Economists expected the nations trade balance to equal $27.7 billion.

The report fanned some concern over the countrys economic growth prospects and added to Premier Li Keqiang’s challenges to maintain an expansion above 7.5%, something which he earlier pledged to defend. Adding to the concern, the International Monetary Fund trimmed its global growth forecast for this year to 2.9% earlier in the week, down from previously estimated at 3.1% in July. Next year’s projection was cut to 3.6% from July’s prediction for 3.8%.

Chinese officials did not initially explain the surprising drop in exports but partial losses were caused by a stronger yuan. A strengthening of the national currency reduces a countrys competitiveness on the international markets as it makes domestic products more expensive for foreign currency holders. Shipments were further hurt by reduced economic activity due to the Mid-Autumn festival in the middle of September.

Another reason for the downbeat reading were inflated export data that started last year. Analysts at Credit Agricole CIB and Citigroup Inc. said before the report that the comparison between Septembers data and numbers from a year earlier might understate the true pictures due to distortions from beefed up numbers in 2012.

Shen Jianguang, Hong Kong-based chief Asia economist at Mizuho Securities Asia Ltd., said for Bloomberg: “It’s all quite murky. There has been an export recovery since July to the U.S. and Europe but it’s been pretty weak. The driving force for China’s recovery at this stage is still housing and infrastructure investment.”

Recent economic news showed that Chinas service sector expanded at the fastest pace in six months in September. The Asian countrys non-Manufacturing PMI surged to 55.4 in September, the National Bureau of Statistics said. Meanwhile, a private survey also showed a rise in activity. The HSBC China Services Business Activity Index marked a moderate rate of increase, posting at 52.4 in September, down from 52.8 in August. In the meantime, the HSBC China Composite Output Index, which covers both the manufacturing and service sectors, stood at 51.2 in September, down from 51.8 in August. However, output growth had now been recorded for a second month with manufacturers reporting a further increase in order book volumes.

Earlier in the month, a government report showed that China’s manufacturing sector expanded less than expected in September. The Asian country’s official manufacturing PMI slightly rose to 51.1 in September from 51.0 in August, underperforming analysts’ expectations for a surge to 51.5. A separate private survey showed that the HSBC Purchasing Managers’ Index remained broadly unchanged from August’s 50.1 but underperformed both the preliminary reading and analysts’ expectations for a surge to 51.2. Nevertheless, this still marked an improvement after July’s 11-month low.

The national agency is also due to release the countrys retail sales which likely inched up to 13.5% in September from 13.4% in the preceding month. Industrial production is projected to have expanded by 10.1%, slightly below AUgusts 10.4% advance.