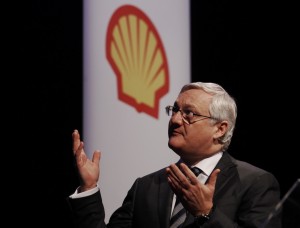 Peter Voser’s four-year journey as a CFO and CEO in the Royal Dutch Shell hot seat is leaving investors a lot surer of Shell than they were in 2009.

As chief financial officer and then as chief executive, Mr Voser helped transform a group that was troubled to its foundations by a reserves accounting scandal and was seen as the lagging leader of the oil industry.

The oil giant condition is healthier, with a portfolio of massively cash-generative projects that have reaffirmed Shell’s reputation for technical and financial excellence. Shell’s cash flow has more than doubled since Voser was appointed as chief executive, up from $21.5 billion in 2009 to $46 billion last year.

However, in recent months, troubles have returned to Shell. The company has under-performed the European oil sector for the past few months, as competition in the face of new investor – Total. Its shares are down 9% since August 1 when it revealed a 20% slump in second-quarter profits, losses in its North American business and a big write-down of its US unconventional oil assets.

One reason investor are skeptical towards Shell is its reputation as one of the biggest spenders in the industry. The company has a $130 billion capital investment program for 2012 to 2015, 20% bigger than the previous four years.

Voser insists Shells balance is well calculated. Announcing a peak in expenditure is, according to the CEO, “the wrong message”. What is more important is capital discipline: making sure the projects that get sanctioned have the right returns.

Mr Voser tends to dismiss the current round of market warnings about Shell’s expenditure level. Emphasizing on future growth he says, the company has learnt from its past mistakes and now invests “throughout the cycle”. It is “my job and the board’s job to take a 10-year view here,” he says. The positives could be noticed already as Shell has a total of 17 projects starting up this year and next

Analysts say Mr Voser has left Shell in good state for years to come. An analyst cited by Financial Times said “We’re heading for a different environment, where oil prices are stable,” “The age of growth at all costs is over.”

In May Voser announced his decision which might have surprised many analysts. Stepping down as Shell CEO comes after only four years in the job for Voser as he felt it was time for a lifestyle change. His wife lives in his native Switzerland and friends say he had tired of endlessly commuting between the family home and Shell’s headquarters in The Hague.

The current consensus among 33 polled by Money CNN investment analysts is to hold stock in Royal Dutch Shell PLC. This rating has held steady since September.