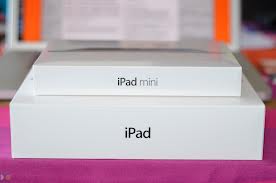 Apple will face difficulties delivering the new version of the iPad Mini with a high-resolution “retina” display this month employees working for the supply chain said.

Apples supply chain is starting now gearing up to make retina displays for the iPad Mini, which means the gadgets could be available in only limited quantities this year, if Apple decides to present it at all, and the company may miss the chance to cash in on the year-end holiday shopping season, the sources said.

Cupertino, California-based Apple has come under pressure to preserve market share and boost sales against rivals that are rapidly raising specifications and lowering prices such as Samsung.

But higher-resolution screens and cameras, as well as thinner and lighter dimensions, are among the improvements users have come to expect with updated smartphones and tablets.

“If they dont put in retina … there will be howls,” said for Reuters, Frank Gillett, an analyst with Forrester.

The reason behind the delays in manufacturing the retina display screens for the iPad Mini were unclear. One source at a supplier said there were delays in Apples certification of panel producers, which were given strict power-saving requirements. LG Display Co Ltd, Samsung Electronics Co Ltds display unit and Sharp Corp all vied to manufacture the panels, supply chain sources said.

Keeping in mind the time required to fix up screen production, a retina display-equipped iPad Mini would not be on the market in large volumes until early next year, the sources noted.

Apple has also pressed suppliers to reduce costs, two of the sources said, with one person saying the U.S. firm is looking at decreasing memory in iPad Mini for some models to 8 gigabytes
Reduced memory may allow Apple to lower the price of the Mini to boost sales in emerging markets like China where cheaper tablets, many of them running Googles Android operating system, are gaining market share.

“Right now the iPad Mini is more expensive than everyone else in the 7- to 8-inch tablet segment,” said Arthur Liao, an analyst for Fubon Securities in Taipei. “If it could reduce its price by even just $50, it would appeal to more consumers.”

According to most analysts Apple is far from cutting prices drastically as the company high margin high end products hasnt changed.

The delay of long waited new model of iPad mini could temporarily decrease share price. Although the current consensus among 53 polled investment analysts is to buy stock in Apple Inc. This rating has held steady since September, when it was unchanged from a buy rating.