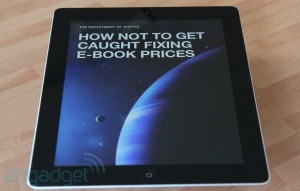 The government found the company guilty of conspiring to increase e-book prices as it launched its online bookstore in 2010. The Federal judge Denise Cote cited emails and telephone conversations between Apple, Amazon and publishing executives, as a proof that Apple acted as a leader in a price-fixing conspiracy as it launched its digital books business.

“Without Apple’s orchestration of this conspiracy, it would not have succeeded as it did,” said Judge Cote, cited by Financial Times. “Apple and the publisher defendants shared one overarching interest – that there be no price competition at the retail level.” she added.

The illegal deal between the tech giant and publishers dramatically increased the prices of digital copies of books, hurting industrys competition and stealing profit from rivals such as Amazon. The technology giant, which was aiming to establish its iPad as an e-reading device, gave book publishers the power to set prices, as long as they guaranteed Apple a 30% cut of the profits and pledged that no other retailer would be able to undercut it. In a drafted message never send to publishers, Apple pose conditions such as publishers should enforce same high-price policy to Amazon in order to standardize the high market prices.

At the time, publishers were discontent that Amazon had devalued their products by establishing the standard price of e-books as $9.99, but were able to push prices up to $12.99 and in some cases $14.99 after signing the Apple deal. Apple’s defense throughout the case was that it wanted to increase choice for users and lower prices – something it claims it managed to do on bestselling titles.

Apple will be called to another trial later this year to be informed how much it should pay in damages for violating anti-trust laws.