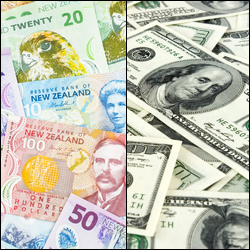 New Zealand dollar went to lower levels against its US counterpart on Thursday after the release of a disappointing report on NZ Gross Domestic Product.

Earlier today official report stated that New Zealands Gross Domestic Product rose by 0.3% in Q1, below the projected 0.5% rise and far below the recorded gain rate during the previous quarter, 1.5%. Growth slow down was a result of the most prolonged drought for the past 30 years in the country, which has had negative impact on farming, especially milk production. New Zealand is a major exporter of milk powder to, among other nations, China. In annual terms, GDP rose by 2.4% in Q1, meeting expectations, but decelerating in comparison with the preceding period rate of growth, 3.0%.

Kiwi dollar was also put under additional pressure after FED Chairman Ben Bernankes statement yesterday. He said that the central bank intended to scale back its asset purchases later in 2013 and exit it in the mid-2014, if US economy met the key economic indicator targets, set by FED.