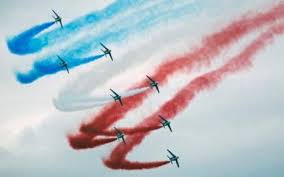 Paris Air Show is the world premier and largest air event in aviation and space industry. The most anticipated event for Boeing and Airbus who will present their vehicles in a fierce competition. Both companies switch roles in previous years as in 2011 the European manufacture led with $44 billion worth of orders while in 2012 Boeing was the brighter one.

Lately, the US company took a lesson from the ongoing issues of their 787 and begun recently to market the re-engined and winged 777. The European manufacturer has taken a conservative approach this time learning from the mistakes of their competitor and keeping it simple but working. The company is in a position to land on top of Boeing this time if everything goes according to their plans. Both companies are in test cycles of finding possible pitfalls.

Airbus models are not completely tested but show some software glitches which is common for those systems according to Webber (EVP operations and member of Executive Commitee).Analyst Nick Cunningham supports Airbus conservative strategies as stating that they move strictly according to plan to achieve their goals – one of them is to see Airbus A350 flying over Paris during the days of the Paris Air Show 2013.