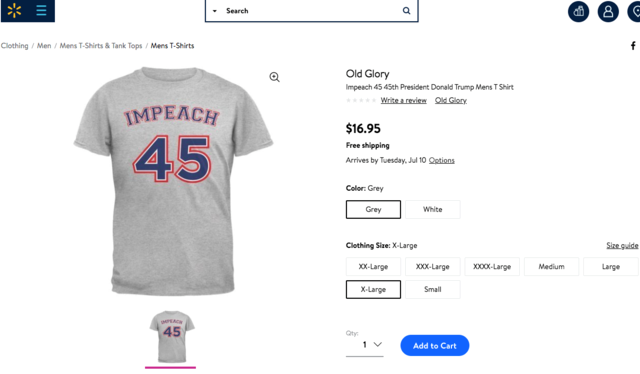 Walmart Inc (WMT) has reportedly removed the controversial anti-Trump “Impeach 45” clothing from its website after a number of users expressed their discontent on Twitter.

The chairman of the group Students for Trump, Ryan Fournier, was among the first users to find out the clothing item was being sold by the retail chain, the International Business Times reported.

“What kind of message are you trying to send?”, Fournier asked in a tweet.

“I didnt want to believe it. So I searched for myself. This is despicable. All American Walmart? Im out!!!”, another user said in a post on the social network.

“These items were sold by third party sellers on our open marketplace, and were not offered directly by Walmart”, a spokesperson for the retail chain said in a response, cited by Fox News.

“We’re removing these types of items pending review of our marketplace policies”, the person added.

The same media also reported that 16 out of 31 surveyed investment analysts had rated Walmart Inc’s stock as “Hold”, while 11 – as “Buy”.