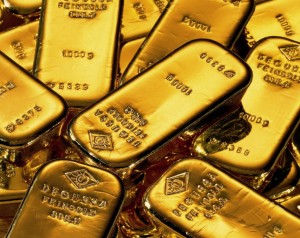 Gold surged to session highs after trading lower throughout the day as offcial data showed the U.S. economy created less jobs than expected in August, which could delay the Fed decelrating its monetary easing program. The unemployment rate fell to the lowest since December 2008 as less people looked for work.

On the Comex division of the New York Mercantile Exchange, gold futures for delivery in December rose by 0.67% to $1 382.20 per ounce at 12:56 GMT. Prices surged to a session high of $1 392.70 an ounce minutes after the release of the data, while days low was touched at $1 361.80. The precious metal fell by 1.7% on Thursday following a batch of upbeat U.S. data but trimmed its weekly decline to 0.9% after yesterdays rebound.

The U.S. dollar plunged and gold rose more than 1% as mixed labor data spurred speculations that the Federal Reserve may postpone trimming its $85 billion per month bond purchasing program. The U.S. Labor Department reported that the U.S. economy created 169 000 jobs last month, which was well below analysts forecast for a rise to 180 000. June and Julys non-farm payrolls were revised downward by 74 000 and Julys final reading stood at 104 000, the lowest since more than a year.

Meanwhile, the U.S. unemployment rate fell to a 4 1/2-year low of 7.3% as more Americans gave up the search for work. The participation rate, the number of Americans who either have a job or are looking for one, fell to 63.2% from 63.4% in July, hitting the lowest value since August 1978.

Data also showed that Average Hourly Earnings met analysts expectations for a 0.2% rise to $24.05. Julys 0.1% contraction was revised up and now showed a flat reading. Year-on-year, earnings increased by 2.2%. At the same time, the average work week for the Americans rose in line with expectations. Average Weekly Hours increased by 0.1 hour to 34.5 hours in August.

Employment at factories expanded by 14 000, well above projections for a 5 000 surge from Julys 16 000 decrease. This was in line with data by the ISM on Tuesday which reported that U.S. factory activity grew at the fastest pace in 26 months. The institute’s ISM Manufacturing index surged to 55.7 in August from 55.4 in July, confounding analysts’ expectations for a drop to 54.0. This was the highest reading since June 2011.

Employment at private service-providers rose less in August than the preceding month. This comes after the Institute for Supply Management said the U.S. service sector marked a major improvement in August. The institute’s ISM Non-Manufacturing Composite index confounded analysts’ expectations for a retreat from last month’s reading and surged to 58.6 in August, the strongest reading since December 2005. Economists expected a fall to 55.0 from July’s 56.0 reading. Government payrolls rose by 17 000 last month.

The dollar index, which measures the greenbacks performance against six major trading partners, fell by 0.46% to 82.30 at 13:27 GMT. The September contract fell to a days low of 82.07 minutes after the data was released, while days high stood at 82.68. The U.S. currency gauge rose by 0.6% on Thursday but trimmed its weekly advance to little over 0.2% after Fridays retreat.

Cary Leahey, senior advisor at Decision Economics in New York, said for Reuters: “Even the Federal Reserve would conclude that the employment trend is moderating and for that reason alone they probably will have second thoughts about tapering bond purchases this month.”

Recent surprisingly positive U.S. data was bolstering speculations that the Federal Reserve has received enough good numbers to begin decelerating its monetary stimulus in September but todays employment report suggested that the worlds biggest economy is still struggling in some aspects. An exit from the stimulus program would deliver a heavy blow to golds demand prospects as the metal is mainly used as a hedge against inflation, which tends to arise when banks ease money supply. Its inverse relation to the dollar also pressures the market as a reduction of the bond purchases will strengthen the U.S. currency.

The precious metal rose on Thursday after payrolls processor ADP (Automatic Data Processing) reported on Thursday that the U.S. private sector created 176 000 jobs in August, less than last month, and underperformed expectations for a drop to 182 000. July’s reading was revised downward to 198 000 from the initial 200 000 reported. Analysts however said that the data was good enough to expect that Friday’s non-farm payrolls will mark an improvement, which did not happen.

Also on Thursday, data by the U.S. Labor Department showed that fewer people than projected filed for initial unemployment payments in the week ended August 31. The government agency reported that last week’s Initial Jobless Claims fell to 323 000, near a five-year low, outperforming expectations for a drop to 330 000. The preceding period’s reading received an upward revision of 1 000 claims to 332 000.

The Federal Open Market Committee is due to meet on Sepetmber 17-18 and reassess the U.S. economys recovery pace and its next moves. Latest mixed data however is leaving market player ambivalent about ther expectations. Julia Coronado, New York-based chief economist for North America at BNP Paribas and a former Fed economist, said for Bloomberg: “The Fed is certainly going to want to get more information before they make this move, particularly given how violent the financial-market reaction has been to tapering. You’re not going to play Russian roulette with the U.S. economy and risk another backlash in interest rates.”