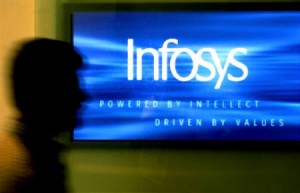 Infosys Ltd, Indias second-biggest software exporter, revealed in a statement that its profit over the third fiscal quarter surpassed analysts forecasts as the company attracted new customers under the lead of its new CEO.

Infosys said that revenue grew by 5.9% to INR137.96 billion and reaffirmed its expectations for an increase in full-year US dollar sales in the range from 7% to 9%, based on September 30 currency levels. It achieved revenue of $8.25 billion last year.

The Chief Executive Officer of the company – Mr. Vishal Sikka – said in a statement: “The demand environment continues to be good. There continues to be a tremendous demand for innovation across every industry… but we continue to see pricing pressure on what I might call yesterday’s services.”

Mr. Sikka, who took over the position of Chief Executive Officer in August 2014, has been recently focused on bringing new life to the company after a period of underperformance.

The chief executive is putting his efforts in a strategy of distinguishing Infosys by using artificial intelligence and automation in order to help its clients reduce expenses. Earlier, Mr. Sikka made a promise to make Infosyss productivity better for each of its services. The company plans to train 500 employees each three months in a special artificial intelligence course lasting for three weeks.

The company managed to win contracts from Discover Financial Services and Bank of Makati Inc. during the last fiscal quarter.

D.D. Mishra, a research director at Gartner Inc., said for Bloomberg: “Infosys is reinventing itself, and it’s going in the right direction. These kinds of investments, focus and attention and sending across the right messages are going to win the turnaround.”