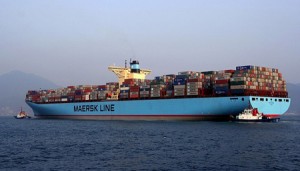 According to the companys statement, its earnings excluding impairment losses, divestment gains and discontinued operations are expected to amount to $4.5 billion in comparison to the previously raised forecast of $4 billion dollars.

The net operating profit of Maersk Line, which is responsible for the transportation of about 15% of worlds containers, making it the worlds biggest, rose by 24% to $547 million in the second quarter from $439 million a year earlier. The result is due to a 4.4% decrease in the divisions expenses and a 6.6% increase in shipping volumes.

The companys net profit jumped threefold to $2.25 billion in the second quarter, surpassing analysts projections of $2.1 billion. Maersk also said that its revenue increased by 2.2% and reached $11.95 billion. The upbeat results were partly attributed to better fuel efficiency following the introduction of the more economical Triple E vessels, which consume 15% less fuel than older ships. Fuel costs were trimmed by 2.8% to $1.3 billion.

Jonathan Roach, an analyst with London-based research firm Braemar Seascope, said for the Wall Street Journal: “Stringent cost cutting over the last couple of years combined with the increased volumes, which are higher than the average 5% for the industry, point to a very good year for Maersk.”

As a result of the upbeat performance and raised full-year projection, Chief Executive Officer Nils Smedegaard Andersen said that the company intends to buy back shares for about $1 billion – the first formalized buyback in the companys 110-year history. Mr. Andersen said in the statement, which was cited by Bloomberg, that the buyback is planned within the next 12 months “due to the current strong financial situation”.

As reported by the Wall Street Journal, AP Moeller-Maersk A/S plans “to evaluate on an ongoing basis additional buy-back programs and potentially seek a renewal and extension of the authorization to buy back own shares for subsequent years after the completion of the share buy-back program announced today.”