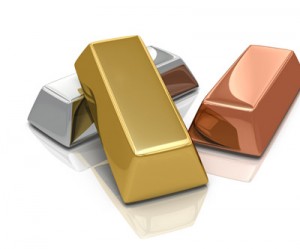 Gold dropped on news that the US pending home sales figure recorded a significant improvement, which raised positive sentiment for the economy, and pressured gold. Silver shifted with the yellow metal. Copper remained steady, supported by US data and outlooks of improving demand in the worlds top industrial metals consumer China.

Gold futures due in June traded for $1 293.5 per troy ounce at 14:47 GMT on the COMEX in New York today, losing 0.56% so far, recording the highest in 10 days price earlier, at $1 306.6 per troy ounce. Last Thursday prices dropped to as little as $1 268.4 per ounce – the lowest since early February, before rallying on Ukraine. For the previous 3 sessions the contract has added 1.53%, as the crisis in Eastern Europe bolsters safe-have demand.

The recovering US economy has been the strongest force that drags gold down recently. Todays report from the National Association of Realtors on pending home sales, which measures the change in the number of homes under contract to be sold, showed the volume of contracted sales in the US has increased by 3.4% in March. The figure far exceeded expectations of a 1.0% growth and reversed Februarys 0.8% contraction, further raising outlooks for the worlds largest economy. The strengthening of the US economy supports the dollar and boosts riskier equities demand, reducing the appeal of the precious metal as an investment.

Last week’s reports on durable goods orders and jobless claims in the US were the latest in a number of readings to bolster prospects for the economy. The reports revealed demand for lasting products registered a 2.6% growth from February, while the 4-week average of jobless claims added only 4 750, and continuing jobless claims shrank by 61 000 to a total of 2.680 million, down from last week’s 2.741 million claims.

Earlier today Hennadiy Kernes, Mayor of the city of Kharkiv, which is one of the bastions of pro-Russian sentiment, was shot in the back while jogging; motives and perpetrator remain unknown, but fears of an escalation in Ukraine have given safe-haven considerable support. Later in the day, the US expanded sanctions against Russia to include a further 7 individuals and 17 companies, believed to be close to Russian President Vladimir Putin.

Previously, on Friday the confrontation took a turn for the worse, as a group of international observers was taken hostage by separatist militants near the town of Sloviansk. The group includes nationals from Germany, Poland, the Czech Republic, Denmark and Sweden. On Sunday, armed men marched the captured before cameras, in a move described by Germany as “revolting”. The separatists later released one of the captives, but also said they had no intention of freeing the others. Talks have begun, in an attempt to negotiate the release of the observers.

Last week saw the resumption of the Ukrainian government’s “anti-terrorist” operation against pro-Russian separatists in the eastern regions of the country. The pro-western authorities in Kiev reported that they had killed a number of militants, which prompted the Kremlin to order military drills and exercises near the Russian-Ukrainian border, in a sharp escalation of the tone.

Copper futures for May stood at $3.1220 per pound at 14:48 GMT in New York, dropping 0.08%. The contract recorded the highest price since early March at $3.1390 per pound earlier in the session. The red metal gained 2.67% for the previous 4 trading days, pushed-up by demand in China and growth in the US.

Data from the National Association of Realtors revealed Pending Home Sales recovered from Februarys 0.8 decline to grow with 3.4% in March, surpassing expectations of a modest 1.0% gain. The construction sector, which is a significant consumer of the industrial metal, is a prime indicator for copper demand, and an increase in home sales sends positive vibes for the red metal.

Reports on durable goods orders and jobless claims in the US last week were the latest in a number of readings to bolster prospects for the worlds largest economy. The metal-consuming durable goods orders for March reported a 2.6% growth from February. Further still, computers and electronics posted the highest increase of orders since November 2010, while cars and light trucks recorded the best annualized rate of sales since May 2007, adding to positive outlooks for copper.

This week will feature a number of significant reports for the US. On Tuesday the very important Consumer Confidence Index for April will be released, and forecasts suggest it will be at 83, up from March’s 82.3. On Wednesday the Federal Open Market Committee(FOMC) will release its statement on monetary policy, reading the economic situation in the US, and communicating measures to investors. A stronger economy directs investments away from commodities and towards equities, while a stronger US currency increases the foreign cost of all dollar-denominated materials, such as copper.

Deficiencies in Chinas supply-demand balance have been the source of significant movements on the copper market recently. Tightening of credit regulations made it increasingly harder for businesses to satisfy their demand for the red metal, pressuring the contract. However, demand for copper in China is growing, as construction speeds-up. Additionally, the state reserve is buying massive amounts of bonded metal, perhaps to fuel a targeted 7 million new units of public housing this year. The ambitious plan is being implemented in an attempt to halt rising home prices in the world’s second economy.