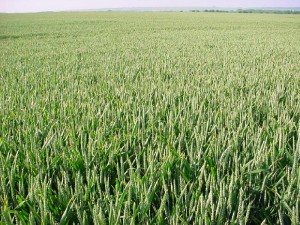 Grain futures were mixed on Friday with wheat and corn advancing, while soybeans retreated as forecasters predicted favorable weather for harvest in the weekend.

Soybeans surged yesterday on speculations that heavy rains will disrupt harvesting of the U.S. crop. DTN called on Thursday for a powerful storm system in the northern Midwest at the end of the week, potentially bringing rain, thunderstorms and strong winds. Concerns however eased as parts of the central and southern plains will be dry between Sunday and Tuesday, which would ease the harvest. Rains in the U.S. should average near to or below the average through the next 10 days, DTN said.

Wheat was well supported on speculations that heavy rains in the Black Sea Region will curb harvests, boosting demand for the U.S. crop. Ukraines national weather center in Kiev said on September 27 that the nations winter-wheat planting may be 30% lower than expected following record rainfall. At the same time in Russia, the area sown to wheat may be as low as 13 million hectares, down from the projected 16.4 million.

In the U.S., DTN reported yesterday that recent showers in the Southern Plains have improved soil moisture for planting and early development of winter wheat.

Elsewhere on the market, corn futures for delivery in December rose by 0.27% to $4.4038 per bushel at 10:21 GMT. Prices held in range between days high and low of $4.4038 and $4.3888 per bushel respectively. The grain was unchanged on Thursday after falling for four straight days and trimmed its weekly decline to 2.9% following Fridays gain.