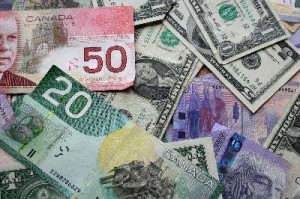 The loonie, as the Canadian dollar is known, traded little changed against its US counterpart, after a report that showed the US annual rate of inflation rose less-than-anticipated in November.

The greenback was pressured by inflation data, which showed that the annual rate of inflation rose less than expected.

Consumer prices, excluding food and energy costs, or core consumer prices, increased 1.7% in November from a year ago, unchanged from October and in line with expectations. Core CPI rose by 0.2% in November from 0.1% in October. Analysts forecast pointed to a 0.1% gain. The Federal Reserve regards that core prices can be a better gauge of longer-term inflationary pressure, because they exclude the volatile food and energy categories. The Feds target usually is to achieve core inflation of 2%.

Meanwhile, official data on Tuesday showed that Canadian manufacturing sales unexpectedly increased to the highest since May 2012.

The Canadian dollar continued to receive support after Bank of Canada Governor, Stephen Poloz said last week that rates were likely to remain in place for some time, reducing speculation that the slowing inflation may prompt the central banks to cut rates.