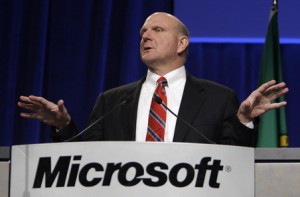 Last month Microsoft Corp.s co-founder Bill Gates announced that the companys chief executive officer is a “complex role to fill” in front of the software makers shareholders. This could be valid, in fact considering Microsofts board is still looking for a final candidate.

On December the 12th, the No. 2 executive of Qualcomm Inc.s – Steve Mollenkopf, was named CEO replacing Steve Ballmer at Microsoft. Alan Mulally, who is the CEO of Ford Motor Co., was also one of the options for the position, but it is his age, 68, and his lack of technology experience that makes the companys board believe such a choice would be risky and inappropriate. The CEO of Ebay Inc. – John Donahoe and the former CEO of Vmware Inc. – Paul Maritz both refused to be considered for the position.

The Microsofts board is facing a real challenge of finding a new CEO, who would deal with the difficulties in front of the company, making this Microsofts biggest transition in decades. An experienced person is looked for in order to be able to run one of the largest public companies worldwide. It is a companys paramount to transform itself into a provider of devices and services amid declining personal-computer sales.

Joseph McCool, who is the president of McCool Group – a search-committee advisory company based in New Hampshire, said for Bloomberg: “Going outside for a CEO is always riskier and always more costly. For Microsoft, which has only had two CEOs, naming a new leader is one of the most critical decisions in its history. It has serious long-term implications because so much is hanging in the balance: the brand, the workforce, the customer base and investors.”

The new CEOs salary is another complicated matter, because Microsoft would probably need to offer much more than the 1.26 million dollars paid to Ballmer as a compensation.

At least one external candidate, whose name has not been named in public is also being considered by the companys board. Microsoft has refused to comment these issues. People with knowledge of these matters said that Satya Nadella, who is the companys head of cloud services, is one of the leading contenders for the position. Stephen Elop, who is a former Nokia Oyj CEO, as well as Tony Bates, who is a business development and evangelism chief, are also competing for the job, although they are less likely to be offered to take the lead.