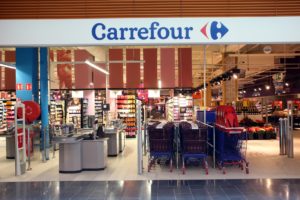 Carrefour announced that it will invest 2 billion Euro for the purchase of 127 European shopping centre sites from Klépierre, as the French supermarket operator has decided to undertake a new strategy of going back to basics in order to update its locations and extend its reach in Europe.

The purchase is happening after the company sold out of several emerging markets such as Colombia, Malysia and Indonesia, and half way through a Carrefours three-year plan to once again focus its attention on its domestic markets. The group hopes that owning both the centres and the connected hypermarkets will provide it with the opportunity to be more flexible, which will help it follow the planned renovation of 150 of its hypermarkets in France over three years. The company is ready to operate a total of 172 shopping centres – the 45 that it already owns plus 127 from its latest acquisition.

Carrefour will have a 42% stake in the new unit. The latter is expected to record a gross annual rental income of about 180 million Euro, which gives the company a reason to believe that it will “rank among the leading European mall companies”.

The European shopping-centre operator Klépierre is also struggling to make success, which is the reason why it hopes the deal will give it the opportunity to upgrade its credit rating and cheaper borrowing costs. The operator also believes that the money received from the deal will allow it to focus on its malls located in bigger urban centres.

The deal takes place 12 years after Carrefour, which is the second-largest retailer by sales in the world, sold the majority of the same portfolio to Klépierre in order help its expansion abroad. The results of the company also have started to improve in 2013.