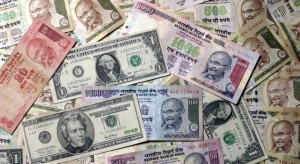 Indian rupee appreciated against the US dollar following yesterdays Iran agreement to curtail nuclear activities in exchange to easing of some sanctions on precious metals, oil, gold and auto parts. This is a historical moment, after a decade-long deteriorated economic and political conditions between the West and the Islamic country.

India satisfies its oil needs by importing 80% of the crude oil that its economy requires and refiners are the biggest purchasers of foreign currency in the nation. Raghuram Rajan, the Chairman of the Reserve Bank of India (RBI), cited by Bloomberg, predicted last month that the shortfall in the broadest measure of trade will narrow to $56 billion in the year through March 2014 from a record high of $88 billion in the previous 12 months.

After Irans agreement to reduce nuclear activities was announced yesterday, today the price of the brent crude lost 2.2%. Vikas Babu, a trader at Andhra Bank in Mumbai, cited by Bloomberg, remarked that “The Iran deal is a huge boost as our oil costs will come down”. Moreover, the rupee, received further support by November 22-nd Reserve Bank of Indias (RBI) decision to conditionally extended the swap-window for banks to swap dollars raised through overseas debt at discounted rates. The local banks now have the opportunity to make use of the RBIs offer of a new deadline for concessional swaps for dollars raised through overseas debt. The deadline was extended from November 30th to December 31st. According to analysts, the extension of the swap-window will have limited, but still positive influence on the exchange rate of the Indian rupee.

Meanwhile, the markets are expecting at 15:00 GMT the release of the National Association of Realtor’s (NAR) report on pending home sales in the United States, which is an indicator for the future housing market activity. The median estimate of experts pointed a 2.0% gain in October compared to a month ago, after in September sales declined 5.6%. Better than projected results will certainly boost greenback’s demand.