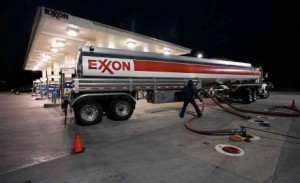 Buffetts Berkshire Hathaway revealed on Thursday that on September 30, it grabbed a stake of roughly 40 million ExxonMobil shares. That stake would be worth $3.74 billion at Thursdays closing price.

The purchase, disclosed in a regulatory filing yesterday, was partially funded by the sale of $500 million of Berkshire’s shares in Exxon’s rival, ConocoPhillips. The filing also showed that Mr. Buffett has slashed his stake in GlaxoSmithKline, the UK-listed pharmaceuticals company, and increased his holdings in Davita Healthcare Partners, a Colorado hospitals group.

Berkshire Hathaway’s investment in ExxonMobil is its sixth largest in a portfolio of blue-chips that includes American Express, Coca-Cola, IBM, Wells Fargo and Procter & Gamble. Exxon is the worlds second largest company by market capitalization after Apple and Berkshires stake amounts to about 1% of the firm.

Mr Buffett’s interest comes after years of struggles for Exxon’s shares. The company didnt fully benefit from the North American shale revolution. It acquired XTO Energy, a large natural gas producer, for $41 billionn including debt in 2009, since when US gas prices have been generally weaker than expected. However, over the past 12 months, Exxon shares have risen 8%, but compared with 17% for Chevron and 35% for ConocoPhillips it is far from a peak according to analysts.

Buffett might be betting on signs that Exxon financial performance is starting to turn round. Company has showed signs that capital spending, which ran 19% ahead of last year in the first nine months of the year, will now level off.

Additionally its total oil and gas production, which has been falling since 2011, gained 1.5% in the third quarter of 2013 compared with the equivalent period last year, thanks to the Kearl oil sands project coming on stream in Canada. The company has predicted that its production will grow 2-3% a year during 2013-17.

Meanwhile, major investor Carl Icahn revealed the size of his previously announced Apple stake, worth $2.05 billion as of Thursdays close.

John Paulson, who made a fortune betting against the housing market, revealed an $88 million stake in FedEx. Fellow hedge fund celebrity Dan Loeb also announced this week that his firm, Third Point, had taken a stake in the shipping giant. Loebs FedEx stake was worth $272 million as of Thursdays close.