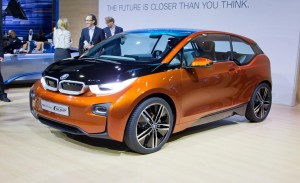 BMW (Bayerische Motoren Werke AG) will use the carbon fiber material for the passenger frame of the i3 electric car, which goes on sale at dealers in Germany tomorrow and will soon be available worldwide.

“Looking forward to 2020, we saw threats to our business model,” Chief Financial Officer Friedrich Eichiner, who was head of strategic planning at the time, said in an interview for Bloomberg in Munich. “We had to find a way to bring models like the 6-Series, 7-Series and X5 into the future.”

For BMW to continue to sell cars that live up to the company’s “ultimate driving machine” claim, the manufacturer needed to offset those emissions with a viable electric vehicle for growing cities, where more and more potential customers would live. This is exactly why BMW is investing in the electric car model i3.

One of the main issues, electric cars had, was being sluggish because of the heavy battery needed to hold a charge capable of moving the car at least 100 kilometers (62 miles). That meant the car needed to be lighter to reduce the size and cost of the power and improve handling. The lightest and strongest material available is carbon fiber. Carbon fiber is thinner than human hair but at the same time tougher than steel.

BMW formed a joint venture with SGL Carbon SE in 2009. As project was of great importance, BMW even made the rare move to secure influence at the carbon fiber manufacturer by buying stake in the company countering competitors.

Although no other car manufacturer followed BMWs strategy the company pushed ahead with setting up a $100 million carbon-fiber factory, starting on a site in Moses Lake, Washington, in July 2010. Due to the material, the BMW i3 weighs 20% less than Nissans Leaf, the world’s best-selling electric car. That helps the vehicle accelerate to 100 kilometers per hour in 7.2 seconds, more than 4 seconds faster than the Leaf.

“The effort that started in Moses Lake is a huge step forward,” said Joerg Pohlman, BMW’s top executive in the joint venture with SGL. “We’re showing that it’s possible technologically and commercially. We’re really at the beginning of this, and there’s huge potential.”

BMW assures production will go on, even beyond the i3 model. Carbon components will most likely be implemented into BMW’s line of models starting with the next 7-Series.

BMW shares slid 0.5% today while having more than 34% return on year-toyear basis.