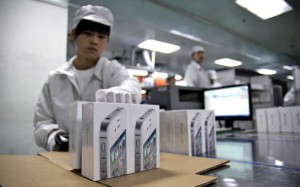 Apple Inc. is locking some record amount of investment to work in new technology including assembly robots and milling machines in order to improve its production process.

To be one step ahead of rivals like Samsung Electronics Co. and lay the groundwork for new products, Apple is spending more on the machines that do the behind-the-scenes work of producing iPhones, iPads and other gadgets.

That includes equipment such as laser and milling machines to carve the MacBook’s aluminum body, and testing gear for the iPhone and iPad camera lens, said for Bloomberg people with knowledge of the company’s manufacturing methods, who asked not to be identified because the process is private.

The $10.5 billion Apple has forecast for fiscal 2014 capital expenditures is a fraction of its $171 billion in sales last year, and some of the money is going toward building its new headquarters in Cupertino, California. Still, Samsung, which has planned about $22 billion in capital expenditures this year, is the only consumer-electronics company outspending Apple. Apple engineers often spend weeks at facilities in Asia where the machinery is stacked, making sure the parts and equipment they buy or make are working properly according to sources cited by Bloomberg. The company has hired robotics experts and its website has several job openings for engineers who can operate high-end manufacturing equipment.

A similar case came earlier this month when Apple struck a deal with GT Advanced Technologies Inc., a maker of furnace equipment that is used to produce sapphire materials that cover smartphone lenses and home buttons. Apple received an exclusivity agreement from GT Advanced for the furnaces in exchange for making a prepayment of $578 million. GT Advanced said it would pay Apple back over five years starting in 2015.

By boosting its spending, Apple is also laying the foundation for new products. CEO Tim Cook said last month the company is preparing devices in technology areas where it doesnt currently compete. The company has been exploring building a wristwatch-like wearable-computing device as well as new television products, people familiar with the plans have said.

The 47 analysts polled by CNN Money, offering 12-month price forecasts for Apple Inc have a median target of 590.00, with a high estimate of 777.00 and a low estimate of 360.00. The median estimate represents a 13.46% increase from the last price of 520.01. The current consensus among investment analysts is to buy stock in Apple Inc.