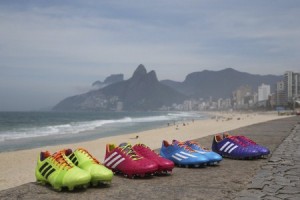 Adidas is racing Nike for the domination over sport apparel markets. The company is hoping sales ahead of next years World Cup football championship in Brazil would provide massive boost to sales.

In its race with market leader Nike Inc., Adidas, the worlds No. 2 sporting-goods maker, is stumbling. The German companys headaches range from a faltering expansion in Russia and weakness in the U.S. to a strong euro and low emerging-market currencies.

In September the group emphasized on currency fluctuations when it cut its earnings outlook for the year by more than 10%. Analysts remain unsure whether the company will meet longer-term profit targets. Meanwhile, Nike has been enjoying strong sales growth.

However, football has remained a bright spot for Adidas, which remains the leader in that market, and the company is hoping that sales ahead of next years World Cup football championship in Brazil will increase interest in new, exclusive products. The company unveiled today its new “Samba Pack” line of football cleats, the first in what will become a steady cascade of new World Cup products, from team jerseys and the match ball to apparel and street wear.

“There are only two players in the field of football; there is us as No. 1 and Nike as the challenger,” said Markus Baumann, the head of Adidass soccer division. “Nike is definitely making some steps forward.”

Football represents only a part of the companys broader business, but in consumer perception of the brand football remains companys most recognized segment. Signs that Nike is catching up with Adidas in its core football business could raise questions about Adidass ability to deliver on its promise to get back on track for strong growth in 2014, which is based in part on a bounce from the World Cup.

The German sportswear group would release earnings report on Thursday after earlier in September it warned of lower profit. Adidas revised its 2013 earnings outlook, predicting net income of 820 million euros ($1.1 billion) to 850 million euros, sharply lower than a previous estimate of 890 million to 920 million euros.

The second largest sport clothing retailer is highly motivated to beat Nike at its home market – the $6.6 billion U.S. running market. The group has stated plans to overtake Nike within five years. Considering Adidas market share in running segment in US of 11%, it could be said that the group has set very ambitious goals. Among other competitors in running are Asics Corp. having more than 12% and Nike at a whopping 54%, according to Matt Powell, an analyst for SportsOneSource. Nike also has more than 50% of the $15 billion global running market, where Adidas is No. 2.

Investors expect Adidas to win the game against Nike in football as they would focus on that segment for assessment of whether company is losing ground to Nike. The group is global sponsor of the World Cup and owns the license to sell World cup products. It sold 13 million match balls in 2010, the year of the last World Cup, and generated about 1.5 billion euros in sales from football products that year. Adidas had football sales of 1.6 billion euros last year and expects sales of 2 billion euros next year.

As we enter holiday shopping season, Adidas will use its World Cup franchise to spread awareness of its brand, mainly with fresh football products.

“Almost every month we will have something new…to create a lot of noise just before the World Cup,” said Mr. Baumann.