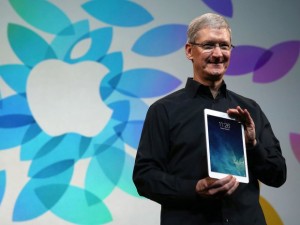 Apple is not stepping down from its core strategy and consolidates the iPad’s position at the high end of the tablet market in the face of competition from lower-cost rivals and new entrants such as Nokia, by putting a greater emphasis on software and distribution channels.

Tim Cook, CEO of Apple, unveiled a new iPad mini with a high-definition screen that starts at $399, $70 more expensive than last year’s model. Apple also introduced a lighter and thinner design for its larger tablet, called iPad Air, starting at the same price as older version – $499.

“You can see from the pricing decision that Apple doesnt really fear much competition,” said Benedict Evans, an analyst at Enders Analysis, who attended Apple’s event in downtown San Francisco yesterday.

Apple’s challenge with the iPad is similar to what it faces with the iPhone. Rivals are introducing Android-based devices that are cheaper.

Samsung, Asustek, Lenovo Group Ltd., Acer Inc. and others are offering tablets with prices starting at less than half of the iPad mini’s previous starting cost of $329. Amazon.com introduced new Kindle Fires last month with higher-resolution screens at prices starting from $229, while Microsoft Corp. and Nokia Oyj presented new tablets this week.

As of right now Apple is the dominant company producing tablets with market share around 32% by unit shipments in the second quarter, according to market trackers IDC. However, that represents a massive jolt comparing it to the 60% company had a year earlier. The previous version of iPad mini now makes up around two-thirds of Apple’s iPad sales, analysts estimate, making it the world’s most popular tablet amid various alternatives.

Shares of Apple, declined 0.3% in the U.S. trading session on Tuesday.

“The supply chain realizes the new products are not going to be a hit. The new iPad Air may do ok, but the Mini isnt going to sell well because it isnt priced competitively. They are right to be concerned,” said Rob Enderle, principal analyst of the Enderle Group, cited by CNBC.

However according to CEO Cook, the iPad is still used four times more than all other tablets together, partly because of the 470,000-plus tablet-specific applications available through its App Store. Apple has sold more than 170 million iPads, he said. Apple also will roll out the new iPad Air in China at the same time as other markets.

“Regardless of what you might hear or read about how many are sold or activated, iPad is used more than any of the rest,” Cook said, cited by Bloomberg.