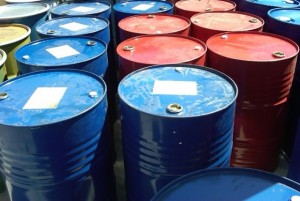 Both West Texas Intermediate and Brent benchmarks rose on Friday but settled the week lower after upbeat economic data from China couldnt offset the negative sentiment fanned by U.S. lawmakers temporary decision to extend the nations borrowing authority through next February. The lack of any permanent solution to the divides between Democrats and Republicans was seen as just kicking the can down the road and braced Americans for similar events in as much as four months. A positive tone in nuclear talks between Iranian diplomats and their counterparts from the U.S., U.K., China, Germany, France and Russia also pressured prices.

On the New York Mercantile Exchange, WTI crude rose 0.14% on Friday and settled the day at $100.85 per barrel after closing at $100.67 on Thursday, the lowest closing price since July 2. The American benchmark lost 0.95% this week after shedding 1.76% in the preceding five-day period.

On the ICE, Brent Futures for December settlement surged 0.89% to $110.08 per barrel on Friday and settled the week 0.78% lower after adding 2.3% in the preceding two five-day periods.

Oil prices swung between gains and losses in the past week on shifting expectations over the outcome of discussions between U.S. lawmakers and speculations whether a last-minute deal over extending the U.S. borrowing capacity and reopening the federal government would be in time to avoid damaging the last quarter economic growth.

Oil regained positions initially after U.S. lawmakers reached an accord that provides government funding until January 15 and extends the nation’s borrowing authority through February 7. The Democrat-controlled Senate passed the measure with 81 votes in favor against 18, followed by a 285-144 vote in the Republican-controlled House of Representatives three hours later. However, there was no resolution to lawmakers’ long-term divides on fiscal policy and no major policy changes sought earlier by Republicans were achieved.

Chip Hodge, senior managing director at Manulife Asset Management in Boston, said for Bloomberg: “There’s nothing to be too excited about. The can’s been kicked down the road for a few months and we will have to deal with the same issues early next year.”

Also fanning negative sentiment, market players remained wary ahead of the upcoming release of delayed U.S. data without clear view of how much damage the 16-day partial government shutdown caused to the economy. The most anticipated September unemployment rate and non-farm payrolls will be released on Tuesday at 12:30 GMT, coupled with average hourly earnings and average weekly hours. The report will not reveal any information about the government shutdown but it will be the final employment data the Fed will use before its October 29-30 meeting. Some analysts expect tapering to take part in December but many have begun to speculate that we wont see any deceleration before 2014.

Richard Bernstein, CEO of Richard Bernstein Capital Management, said for CNBC: “An increasing number of people thought the economy was going to start hitting critical mass and that was all derailed by this thing. In the next month, were going to sort through the data and find out whats going on. That could add a little volatility. I think the underlying trend is still positive, but its not like we have a booming economy… This is going to keep the Fed on the sidelines a little longer.”

Also next week, existing U.S. home sales will be released on Monday, while new homes sales statistics, initial jobless claims, manufacturing PMI are due on Thursday. Import prices are scheduled for release on Wednesday, while durable goods orders and the Michigan consumer sentiment index are to be published on Friday.

The Energy Information Administrations delayed crude oil inventories report for the week ended October 11 will be released on October 21 after the federal government reopened. Analysts surveyed by Bloomberg expected inventories to have risen by 2.75 million barrels to 373.3 million, the highest level since July 5. Refineries operating rate is projected to have fallen to 85.5%, the lowest since April, as units were idled for maintenance works after the peak driving season in the U.S. ended in the beginning of September.

A positive atmosphere in the negotiations between Iran and Western major powers over Tehran’s nuclear program also laid pressure. Although there was no deal struck between the two sides after concluding a two-day meeting in Geneva, arrangements for a second round of talks within three weeks spurred speculations for a thaw in relations. This was the first round of talks between Iran and the Western nations since the election of the moderate President Hassan Rouhani who sought to end a decade-long dispute over Tehran’s nuclear program and ease sanctions on the country’s crude exports which have battered Iran’s economy. U.S. and EU diplomats said the negotiations were held in a constructive atmosphere and went into more detail. Specialists are expected to reconvene and continue discussions within three weeks.

Oil prices however received a lift on Friday and rebounded from multi-week lows after Chinas National Bureau of Statistics reported that the world’s second biggest economy grew at a faster pace in the third quarter both on annual and quarterly basis, indicating prospects for steady demand in the future. Year-on-year, China’s economy expanded by 7.8% in the in the third quarter, meeting analysts’ expectations and outperforming the previous period’s 7.5% advance. Quarter-on-quarter, the Asian nation’s GDP grew by 2.2% from 1.7% in the previous three months and exceeded analysts’ projections for a 1.9% expansion.

Amrita Sen, chief oil market strategist at Energy Aspects Ltd., said for Bloomberg on Friday: “There were concerns about whether the Chinese recovery is sustainable, and there are plenty of concerns still, but nonetheless these numbers are positive and supporting oil prices today.”

A weaker dollar also provided support. The U.S. dollar index for December settlement fell to an 8-1/2 month low of 79.55 on Friday and settled the week at 76.69, down 0.99%. The greenback was pressured throughout the week by the temporary agreement which U.S. lawmakers struck and a downgrade of the U.S. sovereign credit rating by Dagong Global Credit Rating Co. This happened after Fitch Ratings warned earlier in the week that the U.S. AAA sovereign rating could be lowered and put it on negative watch.