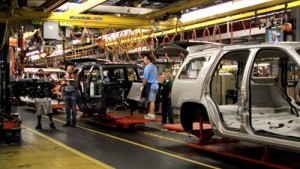 Today, the auto maker officially opens a $200 million metal-processing plant compatible to the Arlington factory that reduces that travel from Ohio to Texas to about 20 feet. Around $40 million a year in shipping costs would be saved from the move, according to the company.

The new plant, is part of a broader strategy to improve logistics. The plan is initiated by GM Chief Executive Dan Akerson , who is anxious to close the companys profit margin gap with rival Ford Motor Co.

Before the new plant was built, General Motors Co. stacked hoods, fenders and doors for its Tahoe and Yukon sport-utility vehicles at plants in Ohio and Michigan and shipped them to its assembly plant in Arlington, Texas.

“The best way to describe logistics is waste,” said GM manufacturing chief Tim Lee. “It is moving productive materials from point A to point B. It has no value and guess what; it doesnt mean anything to the customer. If you can squeeze that waste of the system then you can tactically improve your profit margins.”

GMs CEO plan is to cut all those logistics costs and improve functionality as well as quality of the process. Dan Akersons aim is to lift GMs North American margins to 10% from about 8% now, which would generate hundreds of million of dollars in new profit. Furthermore, shortening the distance between production and assembly would greatly improve effectiveness as according to some of the workers many parts are delivered with imperfections which later are fixed at the cost of slowing down the whole process.

In addition to moving its own production, GM purchasing chief Grace Lieblein is persuading suppliers to move or build new facilities closer to GM assembly plants. For example, interior trim pieces in the 2013 Chevrolet Malibu comes from three suppliers with some pieces traveling from 700 miles away to the cars production lines in Kansas City, Kan.

Ms. Lieblein is negotiating to have one of the suppliers, build a plant closer to the Fairfax location. In exchange, the supplier will get a larger share of orders.

The current consensus among 19 polled by CNN Money investment analysts is to buy stock in General Motors Co. This rating has held steady since October, when it was unchanged from a buy rating. Year-to-date share price of General Motors Co. increased more than 22%.