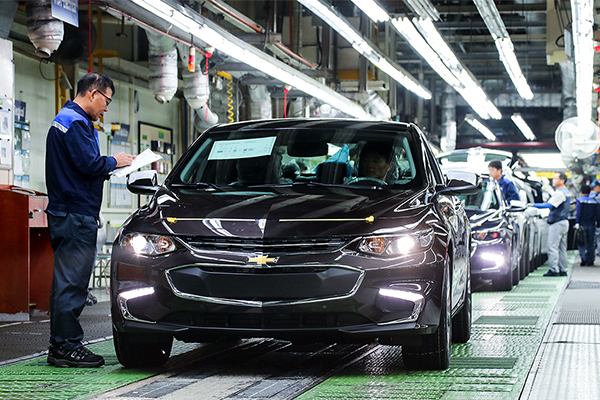 According to a report by Reuters, citing a GM document, the auto makers unit in South Korea intends to cut about 30% of its workforce (5 000 jobs) at plants across the country. On the other hand, production process is to be kept steady, in case the government accepts the companys $2.8 billion proposal for the loss-making operation.

In the week ended on March 4th the shares of the largest vehicle manufacturer in the United States lost 8.51% of their market value compared to a week ago, which marked a third consecutive period of decrease. It has also been the worst performance since the week ended on January 10th 2016.

The stock has extended its loss to 4.88% so far during the current month, following a 7.22% slump in February. The latter has been the largest monthly drop since June 2016.

In February, GM said that it would close its facility in Gunsan and that it was considering how to proceed with its three other factories located in the Asian country.

In a restructuring plan submitted to the South Korean government, GM Korea highlighted a cut of its total workforce from 16 000 to 11 000 people. According to Reuters, since the number of workers at GM Koreas Gunsan plant totals up to 2 000, the planned workforce reduction may affect its other facilities as well. However, the document did not reveal any time frame for the job cuts.

Meanwhile, the auto maker intends to add 1 100 new jobs and manufacture two new SUV models as well as a compact car engine in the country over a period of 10 years, the document showed.

GM plans to add its next-generation Trax small SUV to its South Korea production line in 2020 as well as a new compact SUV in 2022. The company plans to build 200 000 vehicles of each model, the document revealed.

The same media also reported that 10 out of 25 surveyed investment analysts had rated General Motors Company’s stock as “Buy”, while other 10 – as “Hold”. On the other hand, 2 analysts had recommended selling the stock.