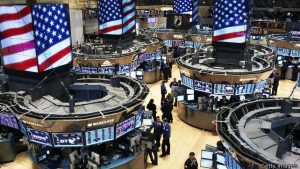 Among the companies included in the benchmark, 18 posted a daily decline on Thursday and 12 posted a daily gain. Shares of EI du Pont de Nemours and Company (DD) recorded the worst performance within the Dow on Thursday, going down 2.03% to close at $62.16. It has been the 9th drop in the past 20 trading days, a third consecutive one and also the sharpest one since February 23rd. March 10th low of $61.76 per share has been the lowest price level since March 4th, when a low of $61.46 per share was registered. DuPont has added 2.12% to its value so far in March, following a 15.37% surge in February. The conglomerates shares have tumbled over 16% since the announcement of the USD 130-billion merger with Dow Chemical Company in December.

Microsoft Corporation (MSFT) was the second worst performer within the DJIA yesterday, going down 1.50%, to close at $52.05. It has been the 10th drop in the past 22 trading days. March 10th low of $51.16 per share has been the lowest price level since March 8th, when a low of $50.59 per share was registered. The technological giant has trimmed its advance to 2.30% so far during the current month, following two consecutive months of decline.

At the same time, the shares of Merck & Company Inc (MRK) registered the most notable daily increase within the DJIA on March 10th, going up 1.30%, to close at $53.04, while marking their 10th gain in the past 20 trading days and also the sharpest one since March 1st. March 10th high of $53.24 per share has been the highest price level since January 5th, when a high of $53.47 per share was reached. In addition, the daily trading volume (12.27M) has been the highest since February 29th. Merck shares have added 5.64% to their value so far in March, following four consecutive months of decline. The pharmaceutical giant has revealed its intentions to discontinue a 20-year joint venture with Sanofi to sell vaccines in the Euro area.

Intel Corporation (INTC) was the second best performer within the Dow on March 10th, appreciating 1.25%, to close at $31.25 per share. It has been the 14th gain in the past 20 trading days, a second consecutive one and also the sharpest one since March 1st. March 10th high of $31.40 per share has been the highest level since January 14th, when Intels shares went up as high as $32.87. The tech giant has risen 5.61% so far in March, following three successive months of decline.

Dow Jones rose to fresh 2-month highs at the start of Thursdays session, but almost immediately reversed direction and erased gains amid heightened volatility on the global markets, following the European Central Banks policy decision. The ECB Governing Council decided to reduce the benchmark refinancing rate by 5 basis points to a fresh all-time low of 0.00%, surprising global markets, as the median forecast by analysts pointed to a rate hold. In addition, policy makers reduced the rate on the deposit facility by 10 basis points to -0.40%, in line with expectations, and the rate on the lending facility by 5 basis points to 0.25%, while the scale of monthly asset purchases was expanded by EUR 20 billion to EUR 80 billion.

However, sentiment was largely influenced by ECB President Mario Draghis remarks. At the press conference, which followed the policy decision, Draghi announced he did not see a need for further rate cuts. “In taking into the account the measures to grow and return to our price stability objective we do not anticipate that it will be necessary to reduce further rates,” Mario Draghi noted. “Of course new facts can change the outcome.”

By employing the Camarilla calculation method, the Friday pivot levels for DJIA are presented as follows:

By using the traditional method of calculation, the weekly pivot levels for DJIA are presented as follows: