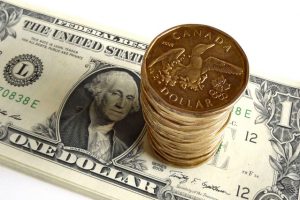 The Canadian dollar has recently been pressured by a continuous decline in oil prices. Crude oil futures for January delivery were up for a second consecutive trading day to trade at $36.77 per barrel as of 10:15 GMT on Tuesday. Yesterday the commodity touched a daily low of $34.53 a barrel, which has been the lowest price level since February 18th 2009, when oil futures slipped as low as $34.13 per barrel. Crude oil has trimmed losses to 11.49% of its value so far in December from a 15.14% drop a day ago.

On Tuesday USD/CAD trading may be influenced by a number of macroeconomic reports and other events as listed below.

The annualized consumer inflation in the United States probably accelerated to 0.5% in November, according to market expectations, from 0.2% in October. If so, it would be the highest rate of inflation since December 2014, when the annual CPI rose 0.8%. In monthly terms, the Consumer Price Index (CPI) probably remained flat in November, after a 0.2% increase in October.

In October upward pressure came from cost of services less energy (up 2.8% year-on-year). Within the category, cost of shelter went up 3.2% year-on-year, cost of medical care rose 3.0% and cost of transportation services increased 1.8%. Additionally, consumers paid more for food in October (up at an annualized rate of 1.6%), according to the report by the Bureau of Labor Statistics. The largest downward pressure on the annual CPI came from prices of energy (down 17.1% in October from a year ago).

The annualized core consumer inflation, which is stripped of prices of food and energy, probably accelerated to 2.0% in November, according to expectations, from 1.9% registered in September and October. If so, Novembers core inflation would be the highest since May 2014. It is usually reported as a seasonally adjusted figure, because consumer patterns are widely fluctuating in dependence on the time of the year. The Core CPI is a key measure, because this is the gauge, which the Federal Reserve Bank takes into account in order to adjust its monetary policy. The Fed uses the core CPI, because prices of food, oil and gas are highly volatile, while the central bank’s tools are slow-acting. In case, for example, prices of oil plunge considerably (as is the present situation), this could result in a low rate of inflation, but the central bank will not take action until this decrease affects prices of other goods and services.

If the CPI tends to approach the inflation objective, set by the Federal Reserve and considered as providing price stability, or a level below but close to 2%, this will usually bolster the appeal of the US dollar.

In case actual CPI performance came in line with expectations or even exceeded them, this would add to the case for a rate hike later this week.

The Bureau of Labor Statistics is to release the official CPI report at 13:30 GMT.

The National Association of Home Builders (NAHB) Housing Market Index probably rose in December to a reading of 63.0, according to market expectations, from 62.0 reported in the preceding month. If so, this would be the 18th consecutive month, when the gauge stood in the area above 50.0. The indicator is based on a monthly survey in regard to current home sales and expected sales in the coming six months. Values above the key level of 50.0 indicate that housing market conditions are good. Therefore, higher-than-projected readings would provide support to the US dollar. The official data is scheduled for release at 15:00 GMT.

Manufacturing sales in Canada probably dropped for a third consecutive month in October, going down at a monthly rate of 0.5%, according to market expectations. In September compared to August shipments were 1.5% lower. The latter has been the sharpest monthly decline since April, when a 2.1% slump was registered. The Monthly Survey of Manufacturing features statistical data regarding sales of finished goods, inventories, unfilled orders and new orders in Canadas sector of manufacturing. About 10 500 items and 27 000 companies are encompassed.

Manufacturing sales are considered as an indicator of demand in the future. A decrease in the number of goods and unsold inventories suggests, that demand is sound and vice versa. At the same time, a decrease in sales (shipments) suggests weaker demand. Therefore, in case shipments decreased at a faster than projected pace, this might have a bearish impact on the Canadian dollar. Statistics Canada will release the official data at 13:30 GMT.

At 16:45 GMT Bank of Canada Governor Stephen Poloz is expected to take a statement. Moderate-to-high volatility of the currency pairs containing the loonie is usually present during such events. Poloz was appointed as Governor in June 2013 for a seven-year term after Mark Carney took over Bank of England.

The spread between 2-year US and 2-year Canadian bond yields, which reflects the flow of funds in a short term, widened to 0.443% on December 14th from 0.397% on December 11th. The December 14th yield spread has been the largest one in more than seven months.