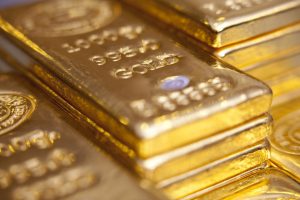 On the Comex division of the New York Mercantile Exchange, gold futures for delivery in December were gaining 0.32% for the day to trade at $1,091.60 per troy ounce. The yellow metal went up as high as $1,093.70 earlier today, while overshooting the upper range breakout level (R4). Gold has been trading below the weekly central pivot level for a second trading day in a row.

On Tuesday gold futures received a boost on the back of soft consumer inflation report from China. Annual consumer prices were reported to have risen 1.3% in October, while missing the median forecast by analysts pointing to a 1.5% increase. It has been the slowest annual rate of increase in prices since May, when the Consumer Price Index went up 1.2%. In September annualized consumer inflation in the worlds second largest economy was 1.6%.

At the same time, annual producer prices in the country dropped for a 44th consecutive month in October, going down 5.9%, according to data by the National Bureau of Statistics of China. It matched the rate of decline reported in August and September, while market expectations pointed to a lesser slump in October (-5.8%).

The precious metal saw heavy selling pressure on Friday, after the Bureau of Labor Statistics said US employers in all sectors of the economy with the exception of the farming industry added 271 000 jobs in October, a figure far beyond what analysts had projected. It has been the most considerable gain in jobs since December 2014, when 329 000 job positions were added. September’s figure has been revised down to 137 000 from a job gain of 142 000 reported previously. At the same time, the rate of unemployment fell 0.1% to reach 5.0% in October, or the lowest level since April 2008. The strong employment numbers may bolster the view that the Federal Reserve Bank will take action and hike borrowing costs at its final meeting for the year on December 15th-16th.

Rate hike prospects tend to have a strong bearish effect on gold, due to increased appetite for higher-yielding assets.

During her testimony in front of the House Financial Services Committee last week, Federal Reserve Chair Janet Yellen said the US economy was “performing well”, while an increase in the target range for the federal funds rate in December was a “live possibility”, if macroeconomic conditions remained on track.

A series of key US macroeconomic data, which may provide additional clues over the possibility of a hike, is to be released on Friday.