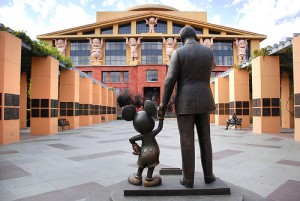 Shares of Walt Disney Co tumbled more than 6% in pre-market trading on Wednesday after the media company reported on Tuesday third-quarter revenue slightly below analysts estimates and lowered its profit guidance for its cable networks unit, offsetting the effect of a record profit.

The company said that it expects annual operating income growth for the unit in the mid-single digits through fiscal year 2016, down from its previous forecast for growth in the high single digits. The downward revision was due to expectations for lower revenue amid a declining subscriber base at cable networks such as ESPN, Disneys biggest business, as well as unfavorable exchange rate swings as a strong dollar erodes the performance of both cable TV and international theme parks. Disney estimates operating income will suffer a $500-million reduction next year due to the strong US currency.

“Investors have become increasingly concerned about what kind of growth, if any, they can count on for ESPN going forward,” said Paul Sweeney, a Bloomberg Intelligence analyst. “This guidance cut will not allay any of those fears.”

However, Disney Chief Executive Bob Iger defended the sports cable network, saying that he has “enormous confidence in ESPNs future”, regardless of how technology disrupts the media business. Mr Iger said there were no plans to move ESPN to an “over the top service” and go direct to consumers, as others in the business have done. He added that ESPN had embraced technology “better than anyone else” in the traditional media and that cable and satellite TV was still the dominant way of viewing.

On the bright side, the company posted a record net profit in the three months ended June 27th of $2.48 billion, up 11% on an annual basis, that topped analysts projections. However, revenue for the period, although still up 5.1% to $13.1 billion, missed projections of $13.2 billion, underperforming Wall Street expectations for the first time in two years.

Operating income at theme parks rose 9% to $922 million, held back by higher costs at Disneyland Paris and lower attendance in Hong Kong, while attendance and spending at US parks rose. Revenue jumped 4% to $4.13 billion.

Operating income at the TV networks division rose 4% to $2.38 billion thanks to a better performance from the Disney Channel, Disney’s ABC Family network and ESPN. Meanwhile, the movie studio booked a 15% jump in operating profit to $472 million thanks to upbeat performance by The Avengers sequel and Cinderella. Analysts also put high hopes on the December “Star Wars: The Force Awakens” movie release.

“We’re making no estimates whatsoever in what we think the film will do,” said Mr. Iger, but added that this was the most valuable film franchise that ever existed. “We fully expect the success of this film to reverberate throughout the company this year and beyond.”