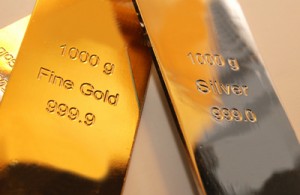 Gold and silver futures were slightly lower during midday trade in Europe today, on track for sizable weekly losses as a year-high dollar weighed heavily on the precious metals investment appeal. Meanwhile, copper futures were also headed for a loss, as downbeat data from top consumer China pressured the red metal.

A significant number of positive economic figures boosted the US dollar to 15-month highs. The positive readings bump up speculation that the US Federal Reserve will be quicker to hike the central lending rate from its 0.25% level for the first time in six years, as the need for stimulus wanes.

Investors now eye the meeting of the Federal Open Market Committee (FOMC), the Fed’s monetary policy body, next week, which is due to decide on the bank’s next steps on monetary policy and stimulus.

A seventh straight $10bn cut in monthly government assets purchases is highly probable, steering the quantitative easing (QE) program to a late-2015 close, with the Fed planning a rate hike after the QE program has concluded. Exactly when the hike would come is the question stirring markets, though, with the Fed expressing plans to probably raise borrowing costs a “significant time after QE has ended”. Analysts, however, project an earlier date, in light of recent upbeat economic data.

Meanwhile, the Eurozone and the euro, the dollar’s main competitor, are experiencing difficulties. A series of downbeat economic data and grounded consumer inflation prompted the European Central Bank to lower its lending rate to just 0.05%, the lowest ECB rate on record, in a bid to revive commercial lending, and to support exports, through a weaker euro.

The weaker euro supports exports from the Eurozone, though it also further strengthens the US dollar, pressuring gold and other dollar-denominated commodities.

“The key driver right now is U.S. interest rate expectations, the Fed and the dollar, which has been making big gains,” analyst Tim Radford at advisor Rivkin in Sydney said for Reuters. “Next week if there isnt that hawkish theme, then we could see a strong reversal in the USD which could lead to some upside in copper,” he added.

Previously, several downbeat Chinese figures were released yesterday. CPI was logged lower than expected at 2.0% annually and 0.2% month-on-month, while PPI was at -1.2% on an annual basis, also below expectations, signaling a faltering Chinese domestic economy.

China is the world’ leading consumer of industrial metals, accounting for 40% of global copper demand.