Skip to content
Home  »  Stock News   »   Qantas Airways Ltd’s share price up, projects to turn back to profit after posting an annual loss of A$2.84 billion 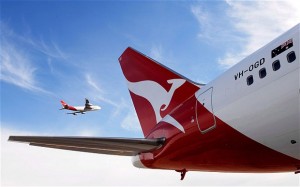 Qantas Airways Ltd, Australias largest carrier, reported a record loss of A$2.84bn (~$2.7bn) for the 12 months ended 30 June 2014, alongside a forecast of profit in the six months through December.

“There is no doubt today’s numbers are confronting, but they represent the year that is past,” Alan Joyce, CEO, said. “We have now come through the worst.”

The companys forecast is considered to be due to a successful cost-cutting program for about A$2 billion. Under the lead of its Chief Executive Officer Mr. Alan Joyce Qantas Airways Ltd is to eliminate a total of 5 000 jobs, while ticket prices were hit by the current market share war.

The reported net loss of A$2.8 billion ($2.7bn) is the largest one in the companys history. Still, Qantas Airways Ltd projected that it would return to an underlying profit before tax in the first half of the 2015 financial year. The Australian carrier also shared that it plans to form a new division for the unprofitable long-haul unit. In addition, as part of the restructure, the company has to reassess the value of its international aircraft fleet.

The international division of the company has been pressed by some difficulties lately, which is why Qantas Airways intends to separate it from its domestic unit into an independent holding company.

The company also revealed a better-than-expected underlying loss before tax, which was A$646 million. The initial analysts projections were of an underlying loss in the range between A$750 million and A$770 million.

“They seem like they may have turned the corner,” Sam Fimis, analyst at Patersons Securities Ltd, said for Bloomberg. The companys projection of a return to profit “gives traders and investors an excuse to have a look at the stock again”.