Skip to content
Home  »  Stock News   »   Citigroup Inc.’s share price up, CFO Gerspach warns that the bank’s trading revenue could drop by 25% in the second quarter 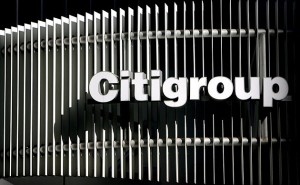 The Chief Financial Officer of the third-biggest bank in the U.S. – Citigroup Inc. – Mr. John Gerspach made an official statement, warning that the companys second-quarter trading revenue could decrease by 20 to 25% in comparison to the result posted a year ago. The forecast slump in trading revenue made by Mr. Gerspach compares to the one of JPMorgan Chase, which reported earlier in May that trading revenue is likely to fall by about 20% during this quarter compared to the same quarter of the financial 2013.

According to Citigroups Chief Financial Officer, who spoke in front of investors and analysts at an investment conference that took place in New York, this drop may affect negatively the overall institutional revenue over the second quarter of the current financial year.

As reported by the Financial Times, Mr. John Gerspach said at the conference: “Historically low volatility, an uncertain global macro environment and geopolitical events have all combined to drive volumes lower, particularly in May.” The banks Chief Financial Officer also said in the statement, which was cited by Bloomberg: “In order to create some level of volatility, there needs to be people on both sides of a view. Right now I don’t think people know what view to be on either side of. It is just a market that is becalmed at this point.”

Citigroup Inc. posted the worst result in its fixed-income trading in the first quarter of 2014, since the beginning of the financial crisis, which inevitably raised some questions about its overall condition. However, according to the companys statement, the second-quarter investment banking revenue may be “somewhat higher” than the first-quarter results. Citigroup reported that its combined adjusted markets revenue, including fixed-income and equities trading, declined by 13% and reached 4.73 billion dollars due to an 18% decrease in its fixed-income revenue.

Citigroups Chief Financial Officer confirmed that a revision of the banks capital plan for 2014 is not expected to be done. The Federal Reserve rejected the plan in March this year explaining its decision with the poor quality of the plan. Mr. Gerspach also revealed that the bank is now to become more focused on making its processes better.