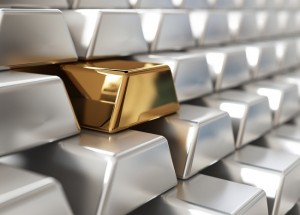 Precious metals were pressured by a bearish report on worldwide gold demand, released earlier today. Paring negative sentiment to some extent, the crisis in Ukraine continues to be in focus, as the presidential election there draws near. Meanwhile, copper futures dropped today, after reaching a three-month high on Monday, with support from the Chinese government and tight supply.

The World Gold Council reported that China, the world’s top consumer of gold, has seen an 18% quarterly drop in gold demand for the first three months of 2014. The decline was 55.4% on a yearly basis. Meanwhile, India, the second-top consumer of the precious metal, saw its demand fall 26%, while imports plunged by 52% for the same period, after restrictions imposed by the recently-replaced government.

However, Indian demand might be recovering very soon. Reserve Bank of India Governor Raghuram Rajan said the new finance minister of the country will decide whether to ease restrictions on importing gold. The new PM Narendra Modi is seen as more business-friendly, and speculation of improving trading conditions in the world’s second-top gold consumer offered resistance to the bearish report for the metal.

Elsewhere, US stocks gained on Monday, after setting record-high standings last week. Standard and Poor’s 500 Index, the broadest measurement of US stocks, closed at 1885.08 on Monday, recording a 0.38% gain, adding on Friday’s 0.37% growth. The gauge closes on the record-high figure of 1902.17, set last week. Dow Jones Industrial 30 Index was at 16 511.86 as trading on Wall Street ended on Monday, gaining 0.12%, for a total of 0.39% since Friday, and also nearing last week’s all-time high of 16 715.44. Nasdaq 100, which excludes financial institutions, logged at 3615.62 as the session closed, recording the highest level since early April, and gaining 1.41% for the past two sessions.

Gains in stocks are usually accompanied by drops in havens, since investors divert their attention to the higher risk-reward offered by stocks.

Assets at the SPDR Gold Trust – the largest gold-backed exchange-traded fund, remained at 781.98 tons on Monday, after returning to a two-week losing streak on Friday. The fund has lost some 12 tons over the last two weeks, reflecting the lowered investor haven demand.

One of Ukraines most influential people, Rinat Akhmetov, whose wealth is estimated at more than $11 billion, urged for a mass rally for peace in the east of the country. He said Ukrainians should stage “peaceful warning protests” at their workplaces from noon on Tuesday, and that actions should continue “until peace is established”, the BBC reported.

The steel magnate, who has an estimated 300 000 employees, is seen as a force to be reckoned with. His earlier actions, similar to this one, resulted in Russian separatists losing control over the town of Mariupol.

Earlier today, NATO and Ukraine said the orders by Russian President Vladimir Putin yesterday for the withdrawal of Russian troops from the border were not being carried out. Both US and European officials said no sign of movement was detected.

On Monday Mr Putin’s administration released a statement, announcing his orders for the withdrawal. It was the third such command recently, all failing to produce a confirmation by western officials.

Meanwhile, Ukrainian officials asked Moscow to put off air-force military drills planned for Wednesday through Sunday in districts bordering Ukraine. The exercises will possibly fuel the confrontation between pro-Russian separatists and authorities as the government prepares to hold a presidential election on Sunday, May 25.

Last week Kiev began talks with a wide array of political and civic leaders in an attempt to ease tensions in the run up to the vote this Sunday. The round table, however, did not have representatives of the armed rebels from the eastern regions of the country, putting in question the probability of a successful resolution.

Previously, the Ukrainian provinces of Luhansk and Donetsk proclaimed independence after a “successful” referendum on May 11. Separatists said they are aiming at incorporating the regions in the Russian Federation, much like the Crimea did earlier this year.

On Monday copper contracts were supported by the Chinese government expressing readiness to hasten economic reforms, in order to bring growth back to previous levels. China accounts for more than 40% of total copper consumption, and demand in the country dictates global prices. Since the slowed economic growth was already priced, the new remarks by the authorities boosted the red metal.

Adding to bullish sentiment, supply of the metal is tight. Stocks at the London Metal Exchange were at the lowest level since 2008, while inventories traded at the Shanghai Futures Exchange were the lowest since 2011.

“The sentiment is certainly there, but the numbers coming out of Asia arent that good; neither are the numbers from the States,” said for Reuters Jonathan Barratt, chief executive of commodity research firm Barratts Bulletin in Sydney.

Elsewhere, Russia’s Norilsk Nickel, which is ranked among the top 10 copper producers worldwide, revealed plans to invest about $1 billion in a rich copper mine. The production is aimed at supplying the Chinese market. The mine will be able to produce 10 million metric tons of ore a year. The project will soon have its go-ahead, as the company reached a preliminary deal with “a key Russian development institution on funding the project,” First Deputy Chief Executive Officer Pavel Fedorov said for Bloomberg.