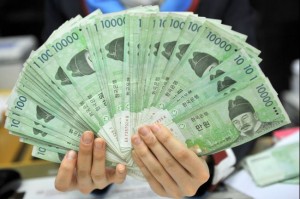 The South Korean PPI probably fell by 0.5% in April from a year ago, according to the median estimate by experts. In March, the index came in 0.36% lower, compared to the same period a year ago.

The Producer Price Index (PPI) is designed to measure changes in prices of items, at their first important commercial transaction (transfer). The PPI is similar to the Consumer Price Index (CPI), as it shows the same general pattern of inflation, with the only difference the PPI is more volatile than the CPI. The higher volatility of the PPI can be explained by the fact, that the it is is weighted more towards goods that are traded in highly competitive markets and is less sensitive to changes in the cost of labor. The index is closely watched by the Bank of Korea, as it can be viewed as a leading indicator of inflation at the consumer level.

The Bank of Korea is due to release an official report at 21:00 GMT. A higher-than-expected reading would have a bullish effect on the South Korean won.

According to Binary Tribune’s daily analysis, in case USD/KRW manages to breach the first resistance level at 1 027.70, it will probably continue up to test 1 031.30. In case the second key resistance is broken, the pair will probably attempt to advance to 1 033.60.