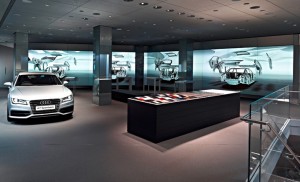 Audi’s flagship car showroom in London seems empty at a first glance and one may conclude it needs a few more cars inside. A single two-seater R8 Spyder sports car, the brand’s most exclusive model, sits alone in the shop’s window.

Instead of half a dozen other cars wedged in around the store as would be typical for a dealership, there are giant television screens controlled by touch pads on the floor where the carmaker’s complete range of models can be customized, viewed, repainted and accessorized.

Audi aims at a new future for car retailing. There are no mechanics in overalls, just salespeople in suits. Miles from the nearest warehouse, on one of London’s most sought-after streets, customers can browse and interact with the premium brand’s range digitally, and buy the car without ever getting in it.

Online sales direct from manufacturers, plus stores such as Audi’s and the entry of groups such as Google, are changing the way car-makers interact with customers and drivers choose their new cars.

The changes come as margins and profits slump at the traditional dealership model and a new generation of buyers look to shop for vehicles in the same way they purchase music, clothes and gadgets. Global online car sales will increase eight times between 2011 and 2025 to almost $4.5 billion, according to research by consultants Frost & Sullivan, to account for just under one in every five new car purchases.

“Digital showrooms and online retailing is the big shift that is coming to the car industry, and it is coming fast,” says Sarwant Singh, a partner at Frost & Sullivan. “This is going to completely change the way people choose and buy their cars.”

For manufacturers, direct online sales can cut out a large amount of overhead costs and boost their margins. European car-makers have seen profitability slump over the past decade amid the worst car market in the region for two decades.

According to a study by market researchers GfK Automotive, roughly a third of British aged under 35 would buy a car online, while 80% have researched the car model they want to buy before they even set foot in a dealership.

“Buying cars directly from manufacturers via the web is only going to gather momentum,” says Damian Long, director at GfK Automotive. “The next place you buy a car may soon be Google.”

Manufacturers are thinking the same way. Nissan, Jaguar Land-Rover, Mini and Mercedes-Benz have all opened digital stores similar to Audi’s across Europe, while Ford, Peugeot Citroën, Fiat and Renault have launched websites for customers to buy cars from them directly.

US electric car manufacturer Tesla Motors , as well as setting benchmarks for emission-free engines and batteries, has been a promoter for online car sales, launching its retail operations through its website only. Renault’s entry-level Dacia brand has made online purchases a centerpiece of its budget, low-cost image.