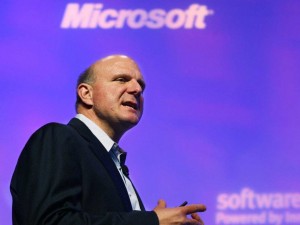 Microsoft Corp. is relying more heavily on rapid growth in some of its new online services to carry it through the transition to the post-PC world, outgoing chief executive Steve Ballmer indicated on Thursday in what could be his last meeting with Wall Street analysts.

“Office 365 and Azure have got to be a touchdown,” Mr Ballmer said of the worker productivity and cloud platform services that have assumed a central place in the company’s arsenal. They have to “really, really kick ass,” he added, pointing to their expansion as one of the most important short-term priorities for the company.

The comments were inspired by Microsofts first glimpse of the overall financial impact of its services businesses, as it unveiled a new breakdown of revenues and profits that was promised when it announced a sweeping reorganization in July. The numbers highlighted the growing importance of services for the first time, with revenues growing by 13% last year to reach $12.3 billion, or 16% of the total. However, services produced a gross profit margin of only 24%, compared to a corporate average of 74%.

To finance the high costs of the transition, Microsoft also said it would raise its capital spending by around 50% in its current fiscal year to $6.5 billion, with most of the money earmarked for new data centers and servers to support a massive expansion into cloud services.

Analysts had looked to the meeting, held at the company’s Redmond headquarters, for clues about the financial effects of Microsoft’s plan to push faster beyond its PC stronghold into mobile devices and cloud services.

Microsoft will continue to challenge Google, which has secured pole position in Internet search and is one of the few companies with the breadth to take on Microsoft, Ballmer said. Regulators should look at what he called Google’s “monopoly” in search, he said.

Microsoft said it’s still seeking a new CEO, and didn’t offer any updates on the process.

“The board continues on the process that we laid out in late August,” Chief Financial Officer Amy Hood said at yesterday’s conference, which was delayed by a power failure at the venue in Bellevue, Washington. “We’ll update you when appropriate.”