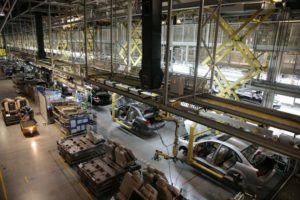 General Motors Cos China joint venture will recall close to 1.5 million vehicles due to a defect with the fuel pump brackets, in one of the largest safety recalls in the worlds biggest auto market. Right after the news was released, GM shares slipped 1.4%.

Analysts said the issue hasnt resulted in any known accidents and would be relatively easy to fix. Still, the recall is an unwelcome hit to the US auto maker, which has lagged behind rival Volkswagen AG as Chinas top-selling brand.

A GM spokeswoman in China said the recall involved a bracket on the vehicles fuel pump. It could crack with use over time, causing fuel leakages in extreme circumstances, she said. There have been no reports of casualties, she added.

Yale Zhang, head of Shanghai-based consulting firm Automotive Foresight, said GM was unlikely to sustain a big reputational hit in China because of the recall.

“There are so many recalls these days, and some automakers call back products proactively more as a precaution,” Zhang said. “In this case, the recall shouldnt affect GMs reputation in China that much.”

Last month, Volkswagens Chinese unit recalled 640,309 vehicles to check they were using mineral oil rather than synthetic oil to avoid gearbox-related electronic flaws. That was part of a broader global recall over a range of issues with several models. It also pulled 207,778 Tiguan compact sport-utility vehicles off the road due to a risk of a partial light malfunction.

GM recieved about 30% of its vehicle sales last year from China, making it a key market,and it is one of a number of foreign brands popular with Chinese drivers. However, GM has been slow to jump on surging sales of SUVs, and is still a small player in Chinas booming market for luxury cars.

GM China President Bob Socia in October described 2013 as “a little bit of an off year,” with fewer new models than in previous years. In the first 11 months of this year, GM sold 2.89 million vehicles, behind rival Volkswagen, which sold 2.96 million in the same period.

GM makes vehicles in China in partnership with both FAW Group and SAIC.

The 15 analysts polled by CNN Money, offering 12-month price forecasts for General Motors Co, have a median target of 49.00, with a high estimate of 56.00 and a low estimate of 39.00. The median estimate represents a 19.69% increase from the last price of 40.94. The current consensus between analysts is to buy stock in General Motors Co.