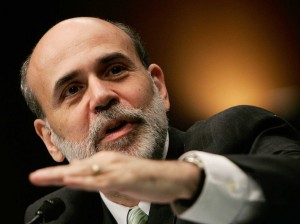 U.S. stocks gained, sending benchmark indexes to all-time highs, after the Federal Reserve said it will reduce the pace of its monthly bond purchases mainly due to expressed confidence in the labor market recovery.

“There was a palpable sense of relief” that the Fed finally ended the suspense, said Russ Koesterich, chief investment strategist at BlackRock Inc., which manages $4.1 trillion.. “We have been waiting for this a long time and it wasnt that bad.”

The policy makers said that it “likely will be appropriate to maintain the current target range for the federal funds rate well past the time that the unemployment rate declines below 6.5%, especially if projected inflation continues to run below” the Fed’s 2% goal.

Many analysts have warned that next year could be less heady than 2013, a year in which the Dow Jones Industrial Average is up 23% so far and the S&P 500 has risen 27%. With the Fed no longer as supportive, some expect the Dow to decline at some point in the new year.

In corporate news, Apple dropped 0.8% to $550.77. Citigroup Inc. analyst Glen Yeung said Jabil’s forecast could be indicative of a steeper fall-off in iPhone production compared with last year, suggesting a risk to the company’s estimate for shipments of 38 million phones in Apple’s second quarter.

Ford Motor Co. lost 6.3% to $15.65. The second-largest U.S. automaker, entering its busiest year for new car and truck introductions ever, said that the cost of bringing those vehicles to market will lead to a decline in its pretax profit next year. Ford forecast that it will earn $7 billion to $8 billion next year after an estimated $8.5 billion pretax profit for 2013.

Micron Technology Inc., the largest U.S. maker of memory chips, sank 4.8% to $21.81 amid concern rising supply will hurt product prices. SK Hynix Inc. plans to build a new factory in South Korea to meet the growing demand for mobile devices, according to two people familiar with the matter.