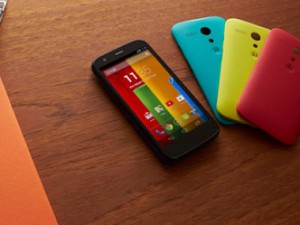 A new recent analysis has shown that Motorola, which is owned by Google Inc., is currently selling its new Moto G smartphone at a lower profit margins than its competitors ones. Most market specialists believe this will put a pressure on both Apple Inc. and Samsung Electonics Co., which are considered the leaders on the market right now.

Google acquired Motorola in 2012 as a strategic and competitive move towards some of its partners specialized in Android-based smartphones manufacturing. Unfortunately, the Motorolas unit recorded about 2-billion-dollar operating losses since it was acquired by Google. Until now, Motorola has restrained itself from taking part in a price war with its rivals, but it seems that the tension between the company and the rest of the Android-based mobile devices manufacturers is starting to escalate.

The Moto G device was launched last month by Google. It was specifically released with a target group of more price-sensitive customers and less-developed markets.

Dennis Woodside, who is the Chief Executive of Googles Motorola, commented that most Motorola competitors sell their smartphones at unreasonably high prices. He also said: “The way I see it is there is massive demand and the market isnt satisfying that demand.” However, its a fact that the practice of selling mobile devices at lower margins usually leads to increasing the tension between competitors. Mr. Woodside refused to comment any sales figures, but he emphasized on the fact that their Moto G device is listed as one of the best-sellers on Amazon.com Inc. in the U.K., Germany and Spain.

This strategic move of Motorola is likely to force some of the companys rivals to take desperate measures, especially now with the holiday season just ahead of us. Samsung is the one that has the most to lose, thanks to the fact it is considered the leading mobile phones seller worldwide with more than two-thirds of its operating profit generated from the mobile devices sale. During the third quarter of the current year, the company registered 31.4% market share.