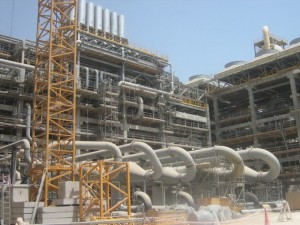 Royal Dutch Shell has been planning to make a multibillion-dollar investment by building a flagship plant in the U.S. The initial idea of the company was to use the plant to convert natural gas into diesel and jet fuel. However, Shell was obviously concerned about the costs of the project and has recently dropped the plans for the plant. The company announced that gas-to-liquids plant didnt seem to be “a viable option for Shell in North America”.

This fact makes the South African company Sasol the only company, that is still planning to build a large gas-to-liquids plant in the U.S., as the company announced its intentions two years ago.

On the other hand, the company is probably considering a way to take advantage of the arbitrage opportunities opened between cheap US shale gas and expensive crude oil. Shell had hinted about a possible GTL (gas to liquids plant) plant in the Gulf of Mexico region. However, this isnt going to boost the company because of the already great results of shale oil production in North America.

Furthermore, the situation would provoke some fears of equipment and labor shortage. Many of Shells investors have been pressing the company in order to make it show better capital discipline. This was provoked by increasing costs of the company, which raised to 45 billion dollars in 2013, which is about 5 billion dollars more than the initially planned amount of money.

The chief executive of Shell – Peter Voser, commented the situations: “We are making tough choices here, focusing our efforts and capitals on the most attractive opportunities in our worldwide portfolio, to add value for shareholders.”

The Shells decision has a large impact on the entire gas-to-liquids industry. After all, the fact that Shell is considered a leader on the market is not to be underestimated, especially taking into account that company is an owner of a GTL plant in Quatar estimated to 19 billion dollars.

No matter of the decision of leaving the initial plan of building GTL plants in the U.S., Shell still has several potential large projects, which are able to help it gain profit thanks to cheap shale gas in North America. The Chief financial officer of the company – Mr. Simon Henry announced that there are three projects the company bets on, but at the current moment it cant afford taking all three of them at once.