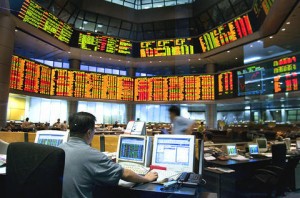 Asian stocks hesitated between gains and losses as China’s manufacturing growth beat analyst estimates and retail sales in the US expected to turn the weakest holiday results since 2009.

The MSCI Asia Pacific Index was little changed at 142 as of 2:02 p.m. in Hong Kong, having fluctuated between gains of 0.1% and losses of 0.4%. About five shares declined for every four that rose on the benchmark index. More than $8 trillion has been added to the value of global equities this year, the biggest increase since 2009, as central banks took steps to shore up economies worldwide.

Over the weekend, China issued new guidelines for its IPO market, where nearly 800 firms are awaiting a chance to list after the country in late 2012 instated a moratorium on new entrants. The China Securities Regulatory Commission, which issued the guidelines, said companies my begin listing as soon as January. Analysts estimate roughly three-quarters of the companies seeking to go public in China are small-to-medium sized companies.

In US, futures on the S&P 500 Index added less than 0.1% today. The benchmark index slumped 0.1% on Friday as investors sold shares in the final half hour of a shortened trading session, erasing earlier gains fueled by a rally in online retailers amid Black Friday sales.

In corporate world, shares of eBay jumped 2.5% and Amazon gained 1.8% on Friday, outperforming shares of Wal-Mart Stores Inc., which edged up 0.1%, and Target Corp., which slipped 0.8%. The online retailers are expecting record sales today as Cyber Monday is attracting much larger crowd than last years.

Krispy Kreme is forecast to report third-quarter earnings of 15 cents a share, according to a consensus survey by FactSet.

Shares of Archer Daniels Midland Co. fell 3% as last week Australia blocked a $2.7 billion bid by Archer Daniels Midland to buy grain handler GrainCorp Ltd. on concerns that the deal would go against its national interest after heavy lobbying by Australian farmers and conservative politicians. The takeover would have resulted in putting almost all of the country’s export infrastructure under foreign control.