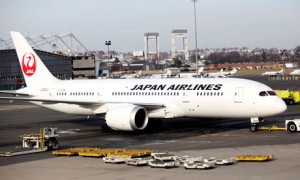 Boeing Co. informed airlines that some Dreamliner aircraft running with General Electric Co. engines must bypass thunderstorms as a precautionary measure, the latest advisory on the 787 that was grounded globally earlier this year.

The advisory recommended Japan Airlines Co., the world’s second-largest Dreamliner operator, to switch to other aircraft on routes linking Delhi and Singapore with its Tokyo base. It comes after on six occasions between April and November, Boeing aircraft operating in thunderstorm conditions at high altitudes suffered what GE described as “temporary thrust losses” as a result of a build-up of ice in their engines. The engines did not shut down completely and all the aircraft were able to land at their planned destinations.

“This looks a lot like a classic teething issue,” Richard Aboulafia, a vice president of Teal Group, said by e-mail to Bloomberg. “It’s probably isolated to just the engine, and even then just one of the two engines available as options. It’s also probably easily fixed with a software tweak, rather than any kind of hardware modification.”

Boeing Co. committed to “work closely” with GE to fix the issue. ANA (All Nippon Airways Co.) hasnt received any notification to avoid certain weather conditions as it uses Rolls-Royce Plc’s engines on its planes, Maho Ito, a spokeswoman for the carrier, said by telephone on November 23.

GEnx is the best-selling 787 engine, according to GE due to its fuel economy. It has been ordered by airlines including United Continental of the US, Xiamen and Hainan Airlines of China, Etihad Airways of the United Arab Emirates, Aeromexico andKenya Airways. Lufthansa of Germany uses the GEnx on its 747-8s.

General Electric, the US industrial group, expects to have by March a software fix to solve the problem of ice build-up that has occasionally caused its GEnx engines to loose power on Boeing 747-8 and 787 Dreamliner aircraft.