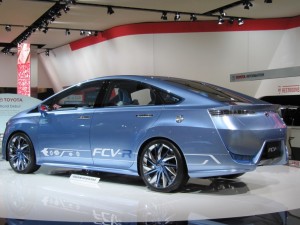 Tesla Motors Inc. has been in the center of news recently as the auto maker had to deal with engine fires investigated by US auto regulators . Meanwhile, other luxury manufacturers like Porsche have begun to attack the alternative energy car market on their own. However, as of right now, no one runs on an engine as revolutionary as Teslas.

Recently, that has started to change as hydrogen fuel-cell cars will soon reach the market. Toyota Motor Corp. started to show its FCV (Fuel-Cell Vehicle) concept. Its alternative engine works on technology unlike Teslas, but the Toyota vehicle may be a magnet to those drivers who have rejected fossil fuels or old-fashioned hybrids. The largest car company in Japan described the engine as environmentally friendly and highly energy-efficient. Furthermore, company explained that hydrogen used in engines to produce electricity could be produced using a variety of readily available raw materials which makes the vehicles highly sustainable.

Earlier last month Tesla’s CEO Elon Musk slammed the hydrogen fuel-cell vehicles such as those being developed by Toyota Motor Corp. and Hyundai Motor Co. CEO’s protestations follow the fact that his Tesla competes for government subsidies with hydrogen cars. Those rebates are fueling infrastructure and lucrative green-car credits that have made the company profitable this year. His criticism toward the rival technology come out as California considers reducing his ability to generate credits in the future.

Musk argued that although hydrogen cars emit only water vapor, the hydrogen fuel can be expensive and dirty to produce.

The debate which ones engine is superior stays unresolved as engineers would say the technologies have little relationship to one another. Apparently the hydrogen fuel-cell vehicles show enough promise that Honda Motor Co. Ltd. and Hyundai will follow Toyota into the market. It seems that three of the worlds largest car companies can use their marketing and distribution experience to flank electric-powered vehicles.

Among tough two months for Tesla, good news were released yesterday as the company won a near-perfect score for its Model S electric car in an annual owner-satisfaction survey conducted by the magazine Consumer Reports and released Thursday.

“Owners of the Tesla Model S gave it the highest owner-satisfaction score Consumer Reports has seen in years: 99 out of 100,” the magazine said.

The survey collects 350,000 responses from subscribers who had bought a car in the last few years. Consumer Reports asked if they would buy that same model again.