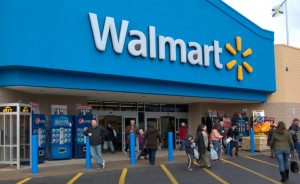 Wal-Mart Stores Inc., the world’s largest retailer, cut its annual profit forecast for the second time this year as the slow economic recovery and increased competition from dollar stores reflect on sales. Wal-Mart reported a 2.8% rise in its fiscal third-quarter earnings and narrowed its full-year earnings outlook.

The company said today that sales at its US stores open at least a year fell by 0.3% from a year ago in the three months to October 31.

Chief Executive Officer Mike Duke is trying to improve Wal-Mart’s grocery offerings and keep prices low to compete with dollar stores, as consumers stay away from spending because of persisting unemployment and higher taxes.

“Traffic remained sluggish throughout the quarter,” Patrick McKeever, a New York-based analyst for MKM Partners, said in a November 12 research note. “Wal-Mart continues to lose share to smaller-format retailers, including the dollar stores. We have also seen more aggressive pricing and marketing around price by the grocery stores.”

Looking ahead, Wal-Mart stated, “For the fourth quarter, we expect EPS to range between $1.50 and $1.60. Our guidance includes the impact of approximately $0.10 per share for certain items… Accounting for these factors, we believe our fourth quarter underlying EPS will range between $1.60 and $1.70.” Analysts project fourth-quarter earnings of $1.69 per share.

The 21 analysts on CNN Money offering 12-month price forecasts for Wal-Mart Stores Inc have a median target of 82.00, with a high estimate of 90.00 and a low estimate of 75.00. The median estimate represents a 3.93% increase from the last price of 78.90. Analysts advise to hold stocks of the company.