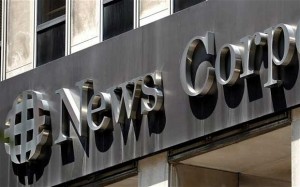 News Corp.s revenue unexpectedly fell in its first quarter since being branched as a stand-alone company, as revenue from its Australian newspapers declined. The results were short of analysts forecasts.

Rupert Murdochs News Corp. reported a larger than expected 3% decline in revenue in its first quarter. News Corp shares fell 4% in after-hours trading on disappointment over the $2.07 billion revenue figure, which missed a forecast of $2.2 billion. Net income in the fiscal quarter, which ended in September, was $27 million, or 5 cents per share. That compares with a loss of $92 million, or 16 cents per share, a year ago.

“We will be candid with you about the challenges, as we have been about the headwinds buffeting our Australian newspaper business,” said CEO Robert Thomson. “But we are confident that our emerging strategy will well serve our investors, employees and our customers.”

As revenue from news and information services declined 10% to $1.5 billion. The company attributed much of that decline to a 22% drop in revenue from Australian newspapers, which include The Australian and The Daily Telegraph.

“The weakness of the Australian newspapers was well known, but the sales decline of 22% was even worse than I had expected,” said Morningstar analyst Michael Corty, cited by Reuters.

At Dow Jones, sales to financial institutions declined. However, the company is focusing on a new product rollout called DJX, that includes its Newswires and other services pitched to banks, hedge funds and retail brokers. Chief Executive Robert Thomson said on a call with analysts that DJX is in the early stages and that it is “too early to get a read on market penetration.” Dow Jones DJX and news competes with Thomson Reuters. It also publishes the Wall Street Journal, which reported flat advertising revenue.

The company said U.S. ad revenue at its flagship newspaper, The Wall Street Journal, remained unchanged, despite improved subscription and circulation revenue. Usage of the Journals mobile app was up 59% in the month of September.

Still, cost-cutting helped lift profits despite revenue that was weaker than expected, said Douglas Arthur, an analyst with Evercore Partners. “The overall result was better than we thought,” he said.

Book publishing revenue from its HarperCollins business sank 7% to $328 million. An increase in e-book sales was more than offset by the divestiture of a live events business, softness in Christian titles and a decision to stop distributing books on behalf of other companies.