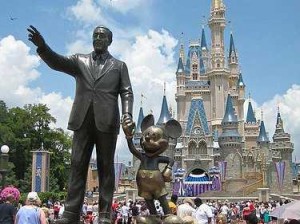 Walt Disney reported record full-year profits and revenues, boosted by big gains in its theme parks and consumer products divisions, as it agreed to a new television deal with Netflix and the release date for its new Star Wars film.

Disney and Netflix reached to deal to develop shows based on Marvel superhero characters. The agreement, would allow Netflix to put more value in its own service as it offers its own content. It aims to expand on Marvel’s cinematic success – movies, such as The Avengers and this year’s Iron Man 3, which are among the biggest box office hits of recent years.

Alan Fine, president of Marvel Entertainment, commented that the agreement was “unparalleled in scope and size”, adding that the “serialised epic” would expand “the narrative possibilities of on-demand television”.

The Walt Disney Company today reported earnings for its fourth quarter and fiscal year ended September 28, 2013. Earnings per share for the quarter increased 13% to $0.77 from $0.68 in the same quarter last year. For the year, diluted EPS increased 8% to $3.38 from $3.13 in the prior year. Excluding certain items affecting comparability, EPS for the year increased 10% to $3.39 compared to $3.07 in the prior year. For the quarter, items affecting comparability had no net effect on year-over-year growth.

“We’re extremely pleased with our results for Fiscal 2013, delivering record revenue, net income and earnings per share for the third year in a row,” said Robert A. Iger, Chairman and CEO, The Walt Disney Company. “It was another great year for the Company, both creatively and financially, and we remain confident that we are well positioned to continue our strong performance and drive long-term shareholder value.”

Disney also set a release date of December 18, 2015 for Star Wars: Episode VII which is believed to create a huge hype among the fans of the sequel. The next installment in the series, will be directed by JJ Abrams.

Consumer spending in the theme parks, was boosted by slowly recovering global economy. The release of the animated movie Planes helped merchandising sales, with the consumer products division reporting a 30% jump in operating income to $347 million.

The 29 analysts polled by CNN Money offering 12-month price forecasts for Walt Disney Co have a median target of 73.00, with a high estimate of 84.00 and a low estimate of 57.00. The median estimate represents a 8.71% increase from the last price of 67.15. The current consensus among investment analysts is to buy stock in Walt Disney Co.