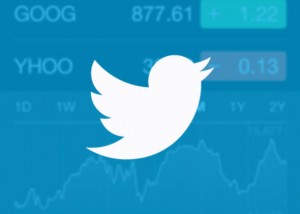 Twitter has finally ended its journey to becoming a publicly traded company after around eight weeks of talks and meetings with investors in eight US cities. The micro-blogging social network priced 70 million shares at $26, above the targeted range of $23 to $25.

The IPO values Twitter at around $14.1 billion. Twitter could raise $2.1 billion, making it the second largest Internet offering in the U.S. behind Facebooks $16 billion IPO last year and ahead of Google Incs 2004 IPO, according to Thomson Reuters data.

Surrounded by investor demand, Twitter raised its price range in its final days as a private company. The company set the price yesterday evening in New York after discussions with its bankers including Goldman Sachs, Morgan Stanley and JP Morgan Chase.

Later today, Twitter executives will gather at the New York Stock Exchange to mark the launch of public trading of the company which reserved “TWTR” as a quote for its IPO.

Some analysts said they expect shares to experience a small jump during the first day. Twelve-month price targets on the stock range from $29 to $54. Brian Wieser, an analyst at Pivotal Research Group who valued Twitter this week at $29 a share, said the stock appears to have strong institutional investor support and could easily close over $30 a share on its first day. However, he warned that trading could be volatile, given that Wall Street has struggled to value social media company.

“Theres still so much uncertainty and its so difficult to even identify how big the opportunity is,” Wieser said. “Twitter will make Netflix look like General Electric as a bellwether of stability.”

Twitter’s management decided that its current valuation of $26 a share, higher than the $23 to $25 range that it set at the start of the week, but below a optimistically expected $28 is in balance between satisfying investors and raising money for the company.

The micro-blogging site plans to use the $2.1 billion from the IPO to fund its international expansion, operating expenses and deal-making. It also has set up a $1 billion revolving credit facility with the three banks leading the share sale, and Bank of America Merrill Lynch and Deutsche Bank.

Despite the hype surrounding Twitter, some analysts have expressed concerns that Twitters valuation is highly dependent on user growth and a maturing advertising business. Although the company has close to a quarter-billion-users, it lacks the customer retention of Facebook that keeps people checking the No. 1 social network on a daily basis. A poll last month showed that 36% of people who signed up for a Twitter account say they do not use it.

Twitter said last month that its third-quarter revenue more than doubled to $168.6 million, but net losses rose to $64.6 million from $21.6 million a year earlier as costs increased.