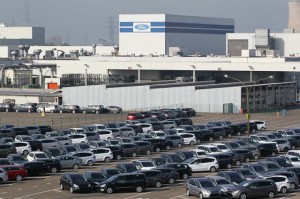 Fords plant in Belgium has been rumored to implement job cuts since last year. However, companys board decided to abandon the whole plant. The news was reported suddenly one morning as a nightmare surprise that almost nobody in Genk expected.

Ford had decided to shut down Genk factory, which employed 4,300 people, and it would produce its last car at the end of 2014. From this day on, the battle among firm, unions and employees has begun. Unions representatives used megaphones to spread the devastating news to workers on duty at the time of the announcement. Some people barricaded factory gates, locking up about 6,000 newly built Mondeo cars, S-Max minivans and Galaxy vans that had already been promised to customers shutting down production for months.

In Genk, a year after the announcement, the measure of calm has returned but at a high price for the company, its workers and the community. Ford succeeded in reaching a labor settlement that will allow it to close the factory, as scheduled. This closure and that of two smaller factories in Britain will cut Ford’s capacity in Europe by 18%. According to the company, this would make it possible for Ford to return to profitability in Europe, as last year it recorded losses of $1 billion.

“Ford did not take this decision lightly,” Stephen Odell, chief executive of Ford of Europe, said in a telephone interview for CNBC on Monday. “We understand that it affects people and their families.” But, he said, “we had to do it to positively influence the company going forward.”

Ford could not afford to sustain losses it has had in Europe. Although Ford cut them by more than half in the most recent quarter compared with a year ago, to $228 million, the years running total was still more than $1 billion in losses for the first nine months. In 2012, Ford lost $1.8 billion in Europe for the full year. According to officials closing Genk factory will allow Ford to consolidate production at a factory in Valencia, Spain.

The relocation of production to Spain has already created 1,300 new jobs in a region that is in far worse economic shape than the area around Genk, although Ford said labor costs in Valencia are not significantly lower.

The 15 analysts polled by CNN Money offering 12-month price forecasts for Ford Motor Co have a median target of 20.00, with a high estimate of 24.00 and a low estimate of 12.00. The median estimate represents a 17% increase from the last price of 17.09. The current consensus among investment analysts is to buy stock in Ford Motor Co.