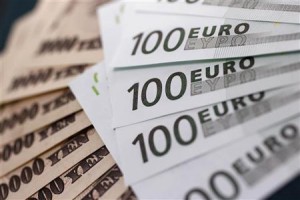 The euro fell to its lowest point in three weeks against the Japanese yen on trading Tuesday, as safe haven demand for the yen was triggered amid speculation that the European Central Bank led by President Mario Draghi will introduce additional stimulus at its policy meeting on Thursday.

Japanese yen strengthened versus 15 out of 16 major rivals on speculation that the ECB will probably reduce its benchmark rate at this weeks policy meeting. Bank of America Corp., Nordea Markets, Royal Bank of Scotland Group Plc and UBS AG have projected during the past week that the ECB will cut borrowing costs from the current record low level of 0.50% on November 7th. Such a forecast is probably based on the fact that the preliminary annual consumer price index in the Euro zone, evaluated in consonance with the harmonized methodology, climbed 0.7% in October, marking the slowest pace since November 2009, after in September the index rose 1.1%. The remaining 66 of 70 respondents participated in a survey by Bloomberg News predict that banks policymakers will keep the benchmark rate unchanged.

“The closer we come to the ECB decision the more risk-off sentiment dominates,” said Ulrich Leuchtmann, head of currency strategy at Commerzbank AG in Frankfurt, cited by the same media. “The feeling that market participants want to get more friendly with those safe havens like the yen is to do with the ECB. Draghi will try everything to sound as dovish as possible but I don’t think we’ll see concrete action this time.”

Meanwhile, the EU revised down its forecast for the region’s economic growth for 2014 to 1.1%, from the estimated 1.2% in May. Additionally, the unemployment rate, having already reached the highest level since the euro currency was introduced, will stay at 12.2% in 2014, while in May it has been forecast at 12.1%.

The common currency is expected to appreciate at a record pace this year, while it will probably continue to rise also during 2014, according to forecasts by the European Commission. Such a scenario may probably obstruct euro blocs recovery, which is supported mostly by exports. Despite its recent drop, the euro still preserves 6% of gains against the US dollar over the past four months. A more expensive euro currency would lead to a more expensive export from the Euro zone and this would cause a negative impact upon recovery.