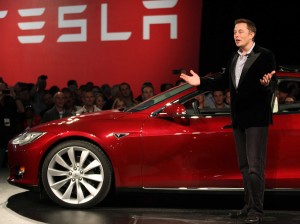 Tesla Motors Inc. experienced its biggest monthly loss of share price in October amid concern among some investors that the immense stock-price surge exxagerated the growth prospects for Elon Musk’s electric-car company. Even after the decline, companys stock is up 372% this year, a performance that let some investors call it a potential bubble.

The sharp drop last month, is the first monthly loss since February and biggest since December 2010. That cut the market capitalization for California-based carmaker to $19.4 billion from its highest $23.5 billion on September 30.

Tesla trades at about 200 times expected earnings, a valuation that can be justified only by highly optimistic assumptions about how many cars it will sell in the distant future. Furthermore, at a recent event in London, even Tesla Chief Executive Elon Musk reportedly said the company had “a higher valuation than we have any right to”.

Probably the main cause of shares tumbling from peak levels was the speculation that the carmaker might record potential drop in revenue from zero-emission vehicle credits generated in California that boosted its first quarterly profits. US regulators are considering revisions to the state program that would cut the number of credits Tesla gets for the Model S, by as much as 40% from 2015.

“There’s perhaps a growing view that significant cash earn in 2013 is likely to turn to significant cash burn in 2014,” said to Bloomberg James Albertine, an analyst with Stifel Equity Research in Baltimore, who rates Tesla a “hold”.

In addition to possible subsidies cuts, Tesla suffered two accidents which led to fires, both happened in October. While there was no investigations by U.S. safety officials, they piled on investors doubts that the stock had gone too far too fast. Tesla dropped 10% over two days following the Washington crash report.

Tesla Motors Inc. revealed it entered an agreement with electronics giant Panasonic Corp. to boost the supply of lithium-ion batteries in order to meet the increased production of Tesla’s upcoming vehicles.

The deal continues a long collaboration between the companies aimed at developing advanced automotive battery cells that could help expand the market for electric vehicles.

“This expanded agreement with Panasonic is important to Tesla as we continue to increase the pace of production,” said Tesla CEO Elon Musk.”“We look forward to strengthening our relationship with Panasonic, and I’m confident that this partnership will continue to be an integral part of Tesla’s success for years to come.”

Tesla releases third-quarter results on November 5. According to analysts the company may report a profit of 11 cents a share excluding some items. That may be the third consecutive quarterly profit for the carmaker that only had losses until this year.