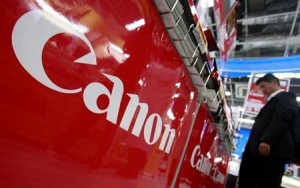 Japans Canon Corp, the world largest camera manufacturers, cut its operating profit outlook for a second quarter in a row as a decline in the market for high-end cameras dragged on with a sharper-than-expected slowdown in emerging markets.

Net income of the company will probably amount to 240 billion yen ($2.5 billion) for the year ending December 31, the Tokyo-based company said in a statement today, cutting its earlier forecast of 260 billion yen. The new projection missed the 250.8 billion-yen average of 21 analyst estimates compiled by Bloomberg.

High-end smartphones supplied with powerful cameras are eating into sales as companies such as Apple Inc. and Sony Corp. release new handsets with stronger built-in lenses and sensors to lure shoppers. The value of worldwide camera shipments dropped 19% in August from a year earlier, a ninth consecutive monthly decline, according to the Camera & Imaging Products Association in Tokyo.

“The industry is facing a structural problem,” said Tetsuya Wadaki, an analyst at Nomura Holdings Inc. “High-end demand in China, which had been the only significant driver for the industry after saturation in developed countries, has come down and isn’t looking like coming back anytime soon.”

Canon said it had expected the Chinese economy to improve after the countrys May 1 Labor Day holiday. But instead the rebound never happened after Chinese policy makers prioritized monetary policy tightening and economic reforms.

The sluggish economy is just another factor weighing on the rapidly declining digital camera market. In the first five months of 2013, digital camera shipments fell 42%, according to the Camera and Imaging Products Association, a Tokyo-based industry group. Not only is the image quality of smartphones improving and narrowing the gap with digital cameras, the handsets are the most convenient picture-taking device to share photos on social-network sites such as Instagram, Twitter, and Facebook.

Canon shares fell more than 6% during morning trade in Tokyo while the Nikkei 225 lost 0.66%. The stock is down about 16% since the company last reported earnings.